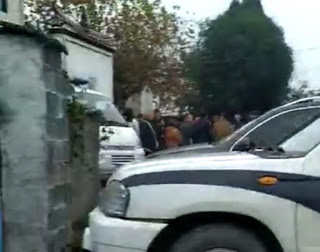 (Lanxi, Zhejiang—February 13, 2020) On December 1, 2019, hundreds of government and public security personnel were dispatched to close a house church in Lanxi and disperse the 30 Christians who were gathering. During the incident, 11 church members were seriously injured and the church assets confiscated.

On the morning of the incident, Lanxi officials sent more than 300 government personnel, led by uniformed public security officers, to surround a local house church where 30 Christians were gathering. Law enforcement officers forced their way into the private house to clear the scene.

If any church attendees resisted or took photos, the authorities would hit or kick them. Of the 11 injured Christians, some sustained fractures while others had their hair pulled out of their heads or were put in headlocks. Finally, church members who resisted the authorities were arrested and released after intimidation. All of the church assets used for services were also removed.

According to local Christians, government officials did not produce any law enforcement documents and switched off their law enforcement recorders. Instead, they only made the announcement, claiming at the scene that the Christians had violated the new religious regulations and that they were banning the relevant meeting places.

This was a rare incident in which the police used heavy violence in order to close a house church. However, Zhejiang Province, which also launched China’s cross cleansing campaign five years ago, has been at the forefront of the country in the crackdown on underground house churches.

In October 2018, city officials of the United Front Department declared to the leaders of a banned house church that Lanxi was the early pilot area for the rectification of house churches in Zhejiang Province. To correct the house churches, they “must be registered or banned.” Once the trial is complete, the model will be promoted in the whole province.

This is all in accordance with China’s religious law, The New Regulations on Religious Affairs, which came into effect in 2018. According to the new law, “without the examination and approval of the Religious Affairs Department of the People’s Government, or without registration with the Civil Affairs Department of the People’s Government, no activities may be carried out in the name of religious organizations.”