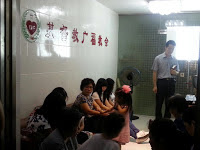 On June 7, Pastor Zhang from Zhongfu Canaan Church informed a China Aid reporter that authorities summoned him to discuss the possibility of moving the church. During the conversation, they asked him about the identity of his church members and the funding of the church. The authorities also requested that the church—which they termed an ‘illegal gathering’—join the government-sanctioned Three-Self Patriotic Movement (TSPM).

“I made my position clear,” Zhang said to the reporter. “I told [the authorities] that the church was by no means a recent establishment; it had been there for a few decades … We cannot join the Three-Self Patriotic Movement. The town government [that operates] in the village hasn’t come to find us yet, but the landlord said today that officials from the public security, firefighting and various other industry and commerce departments will soon enforce the law here. No [official] has come yet [to enforce], but the landlord is already very frightened. He said, ‘You need to move out immediately….’ This is our current circumstance.”

Additionally, government personnel accused the church of having an inadequate firefighting system.

Various government agencies are carrying out similar measures throughout Guangdong and Shenzhen provinces, leading Christians to worry that these are the initial steps of a rampant suppression of religious expression. Pastors who attended the National Work Conference on Religions, which was held earlier this year, reported that the majority of the conversations centered on how to deal with house churches.

Additionally, a pastor said, “They are likely to work [their way inward] from the coastal areas. Our remote regions are very hard for them to reach. At the very least, they will try to win over the majority … They certainly would start in the areas where the churches are most active, such as Shenzhen, Guangdong and Dongguan. They want to carry out a trial run in which they first seize a portion of the region.”

China Aid exposes abuses, such as those suffered by Zhongfu Canaan Church, in order to promote religious freedom and rule of law in China.