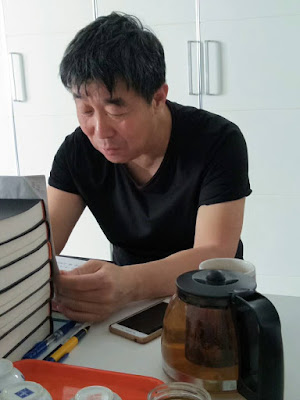 (Beijing, China—February 28, 2021) The Beijing Winter Olympics held its opening ceremony in Beijing on February 4. Elder Xu Yonghai and several members of a house church in Beijing were taken against their will from their homes by the police and placed under house arrest. The church has many members who were persecuted by local authorities.

On February 4, Xu Yonghai, the elder of the Divine Love Fellowship of the Beijing house church, and others were taken to a hotel by the police and placed under house arrest. Xu Yonghai, accompanied by public security officers, left home and was taken to a hotel. It is difficult for him to be interviewed.

It is reported that Xu Yonghai was placed under house arrest at the “Zhe Fei Coffee Shop” near the local Desheng police station in Beijing. The period may take two weeks or even longer.

Others who were taken and placed under house arrest and lost their freedom include:

Xu Yonghai was a practicing doctor and served as an elder in a house church called “Beijing Divine Love Fellowship.” The church has a history of more than 30 years and was one of the earliest house churches established after the June 4 massacre in Beijing. Xu Yonghai joined the church in 1990. The authorities persecuted the first three critical members of the church.

In 1994, Xu Yonghai and two other senior members of the church, pastors Liu Fenggang and Gao Feng, wrote the following in their article titled: “Beijing Christian Divine Love Fellowship.”

We have not stopped gathering in the face of harsh conditions, our faith has not been damaged, the cruel reality has made us more united, our fellowship has always been a solid one, and we will continue to uphold our faith under the calling of God in the future, taking Jesus as our example to walk the journey of the cross with the Lord.

Beijing’s police department claimed that they “slandered” the government, and in 1995 Xu Yonghai and Liu Fenggang were sent to re-education through labor for two years and Gao Feng for two and a half years.

After Xu Yonghai was released from prison, he still insisted on his faith, continued to lead the house church, and at the same time, safeguarded the rights and interests of the members of the Christian faith. His church has attracted many like-minded people. Over the years, a large number of Christians in this church have been arrested, imprisoned, and sentenced because of their beliefs, for protecting their rights, petitioning, and pursuing progress. The members currently arrested and in prison include:

The church’s elder Hu Shigen, a well-known social activist, was arrested on July 10, 2015, and sentenced to seven and a half years.

Jiang Zhanchun was arrested on September 26, 2019.

Ning Huirong was detained in a black jail after being detained in Hami, Xinjiang, in 2016. The outside world has lost contact with Ning for three years.

Chen Dashan, who was forcibly disappeared in 2017, is said to have been sentenced to four years.

Wang Ling was forcibly disappeared in August 2018, and there has been no definite information for a long time.

There are also some members who were forced into exile overseas, such as Pastor Liu Fenggang, Gao Feng, Gou Qinghui, Wang Chunyan, Zhang Quansheng, and others.

Last year, Li Yu, a member of the church, a single mother from Shandong, China, went to Beijing to protect her rights, and she was imprisoned twice, four years and two years respectively.

On December 29 of last year, Li Yu was kidnapped by local officials in Dadong Village, Fangshan District, Beijing. Li Yu was held at the pandemic prevention and control quarantine location in Yong’an Township, Shizhong District, Zaozhuang City. Li was then released home but placed under surveillance. Li Yu has an 8-year-old son locked up in an orphanage, and the government restricted any meeting between the mother and son.

Another member of the church, Wang Yuqin, from Beijing, is also an advocate for rights protection. She was sentenced to one year and nine months of re-education through labor, sentenced four times to criminal detention, and one time to administrative detention. Her husband, Yang Qiuyu, was sentenced once (two and a half years), once to re-education through labor (two years), four times to criminal detention, and five times to administrative detention for petitioning and defending his rights. He was arrested again in March 2019 and has been in detainment since then.

The unique mission of the Beijing Christian Divine Love Fellowship House Church is that they have accepted many petitioners who are suffering and have nowhere to share their stories. These petitioners go to Beijing to seek explanations because their rights and interests have been violated by the local regime and therefore did not feel protected. The church lends a helping hand to such groups everywhere, enabling many rights activists to find a home in the church and become Christians. Still, they have also attracted resentment and suppression from the authorities by doing so.