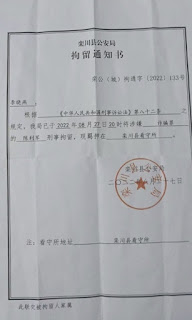 Police took away Chen Lijun on August 13 because he purchased Christian books online and because of his faith. Chen has been detained on charges of fraud until now, and over 100 Christians of his church also face persecution.

On August 27, Li Xiaoyan received his detention notice issued by the Luan County Bureau of Public Security, which claimed that the Bureau criminally detained Chen on suspicion of fraud at the Luan County Detention Center.

Li asked Christians of other churches to intercede for her husband in the following five ways: