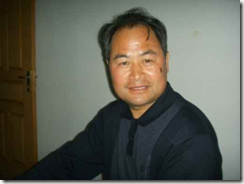 The Christian Post  By Jeff Schapiro | Christian Post Contributor
Pastor Shi Enhao, the deputy chairman of the Chinese House Church Alliance, has been sentenced to a two-year stay in a Chinese labor camp under the accusation of holding “illegal meetings and illegal organizing of venues for religious meetings.”
(Photo: CHINAaid.org Pastor Shi Enhao, deputy chairman of the Chinese House Church Alliance, was recently persecuted by government officials when he was illegally sentenced to two years in a Chinese labor camp.)
The punishment is one that is “extra-judicial” and didn’t require police to wait for a trial or criminal conviction before they implemented it, according to China Aid Association. Pastor Shi, 55, was detained by Suqian City police, in the Jiangsu province, for 12 days beginning May 31. He was criminally detained by the Suqian Public Security Bureau on June 21, which CAA says is the “first step in a legal process that almost inevitably leads to a prison sentence.”
Bob Fu, the President of China Aid, spoke to The Christian Post about Shi’s sentence.
“It’s kind of anticipated persecution, but not to the degree that he was treated,” said Fu.

“His lawyer was denied access to visit him, so these are totally violations of Chinese law,” he said. “So in that sense it’s a surprise to me, but in terms of the persecution they are facing…it’s just intensified recently. I think he’s a part of the target by the Chinese central government to take down because of his leadership role in the Chinese house-church movement.”
China allows freedom of religious belief and protects religious activities to a certain extent, being that religious groups are required to register with the government and operate under official religious bodies, such as the Three-Self Patriotic Movement and the China Christian Council.
Unregistered, or house, churches are not outlawed but are not permitted to openly hold religious services.
When Chinese house churches grow too large they generally break into smaller groups so as to avoid attention from local officials. In April, the Shouwang Church in Beijing decided to meet out in public after being evicted from the leased building where they gathered for worship. Many Chinese churches would have just divided into smaller groups to avoid the government’s attention, but Shouwang has drawn considerable attention leading to many arrests. This past Sunday alone 36 members of the Shouwong Church were arrested, Fu said.
But Shi’s church was already broken down into many small cells, showing that no church in China is necessarily safe. He also said that Shi was likely targeted by the government due to his high rank within the Chinese House Church Alliance.
“The immediate impact is, of course, they lost a preacher in their congregation and it may force their congregation to further divide into smaller groups,” said Fu. “Also, in the long-term, it sends a chilling signal to other large house church leaders that their very existence will be threatened.”
The Domestic Security Protection Department ordered Pastor Shi’s church to stop meeting and has confiscated their musical instruments, choir robes, the congregation’s car, and 140,000 yuan ($21,712.50) in donations, according to CAA.
In addition, Shi’s three daughters and their husbands have been threatened by the police. His wife, 55-year-old Zhu Guangyun, takes care of his 86-year-old mother, Liu Guanglan, who needs constant care. Both Shi’s son and wife are in full-time ministry, and four generations of his family have served the church.
His son, Shi Yongyang, was pressured by police to sign the sentencing paperwork, but when he did they refused to give him a copy of the documents.
Though Shi’s family should be able to visit him while he serves his sentence, Fu says there is the possibility that the camp’s officials will deny them that right.
“According to the Chinese law, the family members should be able to get access,” said Fu, but he also pointed out the way Chinese officials blocked Shi’s lawyer from seeing him on three separate occasions.
“It’s a very difficult time for the family,” said Fu, “so we’re raising awareness and also raising the financial support to help the family.”
http://www.christianpost.com/news/house-church-pastor-in-china-sentenced-to-labor-camp-52819/