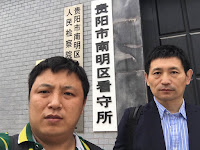 (Guiyang, Guizhou—Sept. 30, 2016) Lawyers representing incarcerated church pastor Yang Hua discovered he has been suffering from serious health conditions during a visit with their client today.

Yang, who has been in police custody for a variety of falsified charges since Dec. 9, 2015, and is currently accused of “divulging state secrets,” was discovered to be suffering from fatty liver disease and scabies along with various other serious diseases.

Despite having contracted these illnesses while in a detention center, officials have refused to pay for his medical treatment, and made Yang pay for his own check up.

In response to his health concerns, one of his lawyers, Chen Jiangang, filed a bail application.

Previously, China Aid received a report from Chen and his co-counsel, Zhao Yonglin, confirming Yang’s poor treatment at the hands of government officials. According to an interview Chen and Zhao conducted with Yang, prosecutors visited him twice, applied pressure to his feet, and repeatedly threatened to kill him and harm his family members if he failed to confess his supposed crimes. After obtaining this information, the lawyers sued the prosecution team, accused them of “using torture to extort a confession,” and requested that the prosecution receive legal repercussions.

Yang’s lawyers originally predicted that his trial would soon be held, following the admittance of evidence to the courts, but as of yet, no trial date has been announced.

China Aid reports abuse cases, such as Yang Hua’s, in order to stand in solidarity with persecuted Christians and promote religious freedom in China.