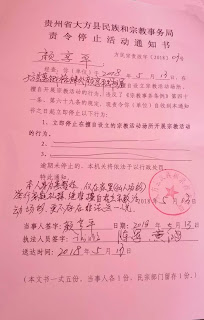 (Fuzhou, Fujian—May 19, 2018) The local governments in Fujian, Jiangxi, and Guizhou sent out notifications shutting down the house churches and requiring the members to join the government sponsored Three-Self Church. According to local Christians, some churches received verbal warnings, while others received written notices.

The Chinese officials have intensified the persecution against house churches since the beginning of this year even preventing the church members from gathering. In early May, a house church in Nanping County, Fujian province received one of these notices. An anonymous local Christian said, “The officials from the county religious affairs bureau forbade us to meet. They said that our gatherings were illegal. They also told us that we should go to the Three-Self Churches if we wanted to meet. In fact, this church only has 20 to 30 regular members, who are all residents nearby. There are no outsiders.”

A local Christian named Lin said that the government has treated the house churches more and more harshly: “The persecution has escalated. The Communist Party members, civil servants, and teachers are not allowed to have religious beliefs. The government of Nanping is investigating local house churches and recording the personal information of the Christians.”

A house church in Jinxian County, Jiangxi was also banned by the government. A local Christian spoke of the local government officials harassment of the church through accusations of “organizing illegal religious activities.” Despite the threats to ban the church, the members kept gathering. He continued, “The church banned by the government had more than 200 members. More than a 100 people come to the gatherings regularly. They won’t give up easily.”

According to local Christians, the government had threatened to ban a large number of house churches in Jinxian County since February. The officials even threatened to arrest the church members if they continued meeting. Fearing retaliations from the government, the local church members did not dare to meet with reporters from foreign media, nor did they want the foreign media to report about their sufferings.

Yan Hengpin also received a notice on May 13 from the Dafung county government demanding him to stop all future gatherings. According to the notice, he had set up a religious venue and organized religious activities, which violated the Articles 41 and 69 of the Religious Affairs Regulations. He responded to the allegations by saying, “I am a Christian. I only worship at my own house, and I have never established any religious venues on my own. I did nothing illegal.”

Yan told the reporter that the government claimed that an investigation aimed at his church had already begun, but the church members kept gathering. “It is only a [branch of the church], not the entire church, that was harassed by the government. There aren’t many people in our church. Only a few dozen.”

According to investigation, you (or workplace) arbitrarily set up religious venues in the rented house of Muege Subdistrict Office, Dafang County on May 13, 2017. Your behavior violated the Article 41 and 69 of the Religious Affairs Regulations. You should immediately stop the following behaviors after receiving this notice:

1. Stop all religious activities at the religious venue you set up on your own.
2. N/A
3. N/A

The Ethnic and Religious Affairs Bureau will impose an administrative penalty if you keep organizing religious activities.

[Editor’s note: The following is a handwritten statement from the defendant, which was written on the notice at the time ChinaAid received it.]

I am a Christian. I only worship at my own house, and I have never established any religious venues on my own. I did nothing illegal.

Signature of the defendant: Yan Hengping

(There are 5 copies of this notice; the defendant keeps a copy; the ethnic and religious affairs bureau keeps a copy)