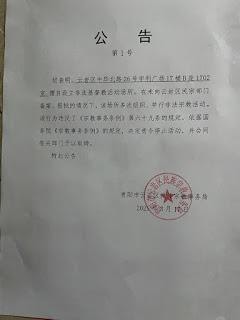 The notice stated the Ren’ai Reformed Church “is an unauthorized self-established venue for Christian activities.” It continued, “Under the circumstances of not filling or obtaining approval from the Bureau of Religious Affairs in Yuyan, the venue organized and held illegal religious activities on multiple occasions.” The notice also stated that the church violated article 69 of the Regulations on Religious Affairs and have “decided to order the suspension of all activities, and will ban them in conjunction with relevant departments.”

As previously reported, believers of Guizhou Ren’ai Reformed Church held a retreat in a local hotel where they confronted the police on March 16; subsequently, ten people were brought to the police station. The church elder Zhang Chunlei was also taken away by the police and was detained for 14 days, and is still currently under police custody. The next day seven of the ten arrested were released. Finally on March 20, after being detained for three full days, Chen Jianguo, Li Jinzhi, and Li Lin were all released. They were arrested under the charge of “illegal activities in the name of a social group.”

Shanghai Lanchun also experienced persecution by local police officials. On March 20, church members were gathered for Sunday service when the police suddenly burst into the service venue and took away Pastor Zhang Peihong, who was on the stage. As shown in a video taken at the scene, a policewoman stopped the church service and asked to conduct a search of the pastor and congregation. Pastor Zhang, who is also a lawyer, has represented the former chairman of Zhejiang Christian Association and the senior pastor of Hangzhou Chongyi Church in the case of Joseph Gu. He also represented Pastor Wang Yi of Early Rain Covenant Church in Chengdu and the case of Living Stone Church in Guizhou. Now he mainly engages in preaching and lectures.

On the same day, Mount Olive Church in Chongqing was also hit hard by the police and the pastor taken away.

The notice specifically named several local streets such as Wucun, Binhai, Kaiyuan, and Lujiang streets. It stated for people to pay close attention to any developments at Huapu building, Kaixuan Plaza, Huicheng Commercial Center, Shangli, Living Rock, Yuanyang building, Hongsheng building in their jurisdiction; so as to curb the resurgence of unlawful religious activities resolutely.

The Xiamen municipal government of Fujian has continuously issued regulations aimed at cracking down on house churches and has wholly banned house churches through the strict monitoring of neighborhood committees.

Recently, house churches in Shenzhen, Guangdong were forcibly closed by the local government. Because the government threatened the banned churches, so the local house churches did not disclose to the public details and information of the churches and events.