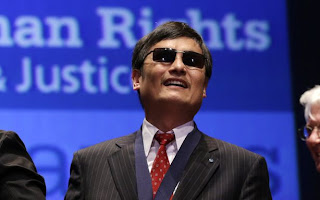 The Atlantic Wire: How to Spy on a Blind Chinese Dissident with an iPad

The already-bizarre saga of blind Chinese activist Chen Guangcheng is approaching the plot of pulpy spy novel. Chen, who faces imminent departure from NYU after completing a year-long fellowship, was allegedly spied on using an iPad that was given to him as a gift upon arriving at the Manhattan university. NYU Law School professor Jerome Cohen told Reuters on Friday morning that the wife of Chinese activist Bob Fu provided Chen with an iPad and iPhone, on which NYU staff later discovered “software that made it possible to track the dissident’s movements and communications.” Referring to Fu and other human rights activists who befriended Chen, Cohen explained to the news agency that “these people supposedly were out to help him and they give him a kind of Trojan horse that would have enabled them to monitor his communications secretly.”

These allegations sound quite nefarious, especially since Chen is blind and received the devices shortly after a uniquely vulnerable moment for him, having left China after escaping house arrest, which had been handed down for a variety of crimes that were never substantiated. But are these claims so suspicious? Fu protested any knowledge of installing spyware on his wife’s gifts, plus the (admittedly vague) descriptions of the illicit software’s functions — “turning a device into a tracking device” and “back[ing] up the [device’s] contents to a remote server” — resemble stock features of Apple’s iOS. Official Apple apps like Find My iPhone and Find My Friends allow anyone with a password to track a device’s movement in real-time. Apple’s popular iCloud service, meanwhile, can be set to periodically back up a device’s content and settings. It’s true that these features could be used to spy on Chen, and inspect whatever content he happened to download, but that doesn’t mean they actually were. Indeed, Fu told Reuters that he simply arranged “the activation of the iPad and iPhone, basic installment, iCloud… there was nothing else there.”

Other evidence suggests that Chen trusts Fu anyway. According to Cohen, Chen regularly meets with Fu and his family. And one of Chen’s consultants, Mark Corallo, told Reuters that “at least to Chen’s knowledge, none of these devices was ever found to have any tracking or listening mechanisms.” That sense of trust appears important to preserve among Chen’s circle of friends and acquaintances. As Chen indicated in a lengthy statement to the press on Sunday, and which his friends confirmed to Reuters, Chen believes that the Chinese government is conspiring with American institutions (like NYU) to suppress his activism. At the same time, his network of supporters — each of whom has an interest in leveraging his considerable global clout to advance particular political agendas in China and elsewhere — appear besieged by infighting, the latest example being Friday’s accusations of spying: a particularly potent charge to level against an ally of a Chinese expatriate.