Hu Shigen: an appeal for the immediate stop of illegal inflictions on Zhang Lin and his daughter in Anhui province 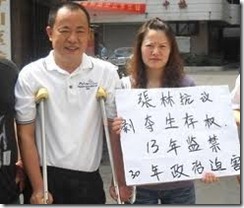 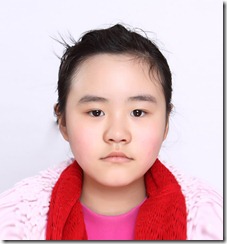 (Photos above: Zhang Lin and his wife and daughter)

Just as the Chinese New Year got behind us and the “two meetings” (the National People’s Congress and the Chinese People’s Political Consultative Conference) are coming up, we heard the news that  the police of Hefei, Anhui province, illegally inflicted harm on Zhang Lin and his daughter.  At about 3:30pm on Feb. 27, several policemen took Zhang Lin, a civil rights dissident of Anhui province, from his home to Hupo police station for illegal interrogation. In violation of the law, they also searched his home, seized his cellphone and other possessions. The most infuriating thing is that four husky men kidnapped Zhang Lin’s 10-year-old daughter Zhang Anni from her school at Hefei, and unlawfully kept her in a room alone for three and half hours, denying her food and the presence of her guardian. The brutal deprivation of her right to schooling and education has caused severe physical and psychological harm to this little girl.

Shocked by the news, we hereby make the following appeal:

1. We strongly condemn the Hefei police’s law-breaking, criminal actions against Zhang Lin and his daughter. We earnestly demand the Communist Party Committee and the government of Anhui province to stop the illegal inflictions right away, investigate and punish those who committed the violations and make sure actions will never happen again.

2. We call on people from all walks of life to be concerned about the miserable circumstances of Zhang Lin and his daughter and to offer all kinds of care and support, including psychological comfort and material aids, to Zhang Lin who suffered the inflictions and particularly his daughter.  Above anything else, they need strong support in terms of law and public opinion, especially the involvement of human rights lawyers in offering legal assistance.

3. We hope officials of the central government will pay attention to this event.  Illegal incident as such that happened in Anhui marked a severe departure from General Secretary Xi Jinping’s instructions, i.e. implementing the Constitution and governing the country according to the law. On what grounds can a nation that fails to guarantee citizens’ personal safety, residence and property safety and children’s right to education carry out the ideal of governing the country according to the law?

We welcome all citizens to co-sign this appeal and forward it on and off the internet.

Hu Shigen, a citizen at Beijing