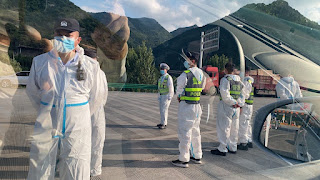 (Shaanxi province, China—July 28, 2022) The case of Chinese human rights lawyer Chang Weiping, who was charged with “inciting subversion of state power” for attending a gathering, was heard in secret on Tuesday. His wife, Dr. Chen Zijuan, and his child were stopped by at least 18 police officers on their way to the court in Feng County, Baoji City, Shaanxi Province, on Monday evening.  A number of human rights activists were taken away by police when they attempted to travel to Feng County to join in solidarity with Chang Weiping’s case.

On July 25, Dr. Chen Zijuan, the wife of lawyer Chang Weiping, posted a video on her Twitter account saying that she was going to attend Chang Weiping’s court hearing in Feng County. She was, however, stopped by police officers on the Feng County highway. As seen in the video, several police officers stopped Chen’s car, and one police officer spoke with Chen; the officer refused to show his officer identification card and tried to prevent her from recording the video. 18 public security authorities and police officers, not including those in the car, forcibly stopped Chen and her child at a highway intersection on the grounds of COVID prevention measures. Her car was surrounded by public security and police vehicles, as well as “unknown” vehicles, and people in white hazmat suits knocked on her car window.

She was advised by the police to return, claiming that she was from a medium-risk area of the outbreak, but she was from a low-risk area in Shenzhen, Guangdong. She had already gathered relevant information and undergone COVID testing before her trip and only needed to test two more times within three days upon her arrival. However, the police had set up strict monitoring of her trip in advance and prevented her from entering Feng County under the guise of COVID prevention measures. Feng County is a small and remote, mountainous town where Chang Weiping was detained.

The police in Feng County conducted a selective inspection of Chen Zijuan’s car. Chen said, “In fact, it was to inspect me, because after inspecting me, other vehicles were not checked.” The police blocked her car and refused to let her go to Feng County, and the mother and son were stuck in the car overnight.

“I’m still blocked at the Feng County highway exit; I just want to sit in on my husband’s trial and figure out why he’s accused of subverting state power. Is that a problem? I never thought I would not even be able to enter Feng County!” Chen Zijuan said.

Lin Qilei, a human rights lawyer whose lawyer’s license was revoked, commented, “In order to prevent family members from attending the trial of the case, this police officer blatantly violated the legal rights and interests of citizens; in violation of laws and regulations!”

On the same day, police took away Tian Qiuli from Baoji City by her hair at a hotel in Feng County because she stood in solidarity with Chang. He Jiawei, a pro-democracy activist from Zhuzhou, Hunan Province, planned to go to the court to show solidarity with Chang Weiping but was threatened and kept at home by state security police. Deng Fuquan, a human rights activist in Sichuan, was taken away by the police from the place where he has his household registration. Lawyer Li Dawei traveled to Feng County, Shaanxi Province, to show his support for Chang Weiping’s trial, but was found and taken away overnight by state security officers from his hometown of Tianshui, Gansu Province.

In early December 2019, Chang Weiping participated in a gathering in Xiamen with Dr. Xu Zhiyong, one of the founders of the Chinese civil society movement, lawyer Ding Jiaxi,  and others, where they discussed current affairs and the future of China and shared their experiences in promoting civil society.

On December 26 of the same year, the authorities arrested those involved in the gathering. More than 20 dissidents and lawyers were forcibly disappeared, summoned, or detained, and some were even charged on suspicion of “inciting subversion of state power” (in some cases, subversion of state power) and “picking quarrels and provoking trouble.” Most of them were released on bail, but Dr. Xu Zhiyong and lawyer Ding Jiaxi were formally arrested. Authorities placed Chang Weiping in Residential Surveillance at a Designated Location (RSDL) and tortured him. They officially arrested him in April 2021.

Mary Lawlor, the UN Special Rapporteur on the situation of human rights defenders, noted on July 9: “Since the so-called 709 crackdown began on 9 July 2015, the profession of human rights lawyer has been effectively criminalized in China.”