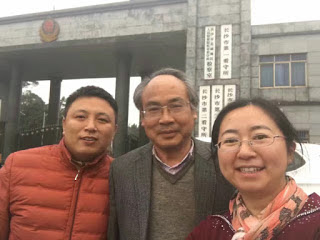 Xie Yang, an attorney who defended the rights of people abused by the Chinese Communist Party, learned he would not face any criminal penalty on Dec. 25. Originally taken into custody during a nationwide human rights lawyer roundup on July 11, 2015, the Hunan-based lawyer spent almost two years in prison before he stood trial on May 8, 2017. Afterwards, Xie vanished, and officials took up residence across from his apartment and installed a barred metal gate that only opened with a fingerprint scanner, sectioning the housing off.

When his wife, Chen Guiqiu, learned of the gate, she contacted international news sources, and officials removed it following the widespread scrutiny.

Xie reappeared, living in his home under the intense monitoring of the government. According to Chen, who fled to the U.S. with the couple’s two daughters during a harrowing rescue, he must report his activities to the government every four hours and is not allowed to leave the city unless he receives permission.

Prior to his trial, Xie revealed that prison authorities tortured him while he maintained his innocence, saying, “If someday I admit any guilt, whether in written form or voice recording, it would definitely not be out of my own will. It would be either caused by continued torture or to get a chance to be bailed out and reunited with my family. Both my family and I are under immense pressure now as the officials ask me to confess and stop talking about my torture.”

While Xie’s verdict means he should be legally free, it also indicates that he was convicted of his supposed crime. As a result, there is no guarantee that the surveillance will stop.

“Xie Yang’s liberation is a wonderful Christmas present,” ChinaAid President Bob Fu said. “We continue to urge Chinese authorities to respect his freedom by ceasing their surveillance and allowing him to travel freely. Please continue praying that the government will stop monitoring him and allow him to be reunited with his family.”

ChinaAid exposes abuses, such as those suffered by Xie, in order to stand in solidarity with the persecuted and promote religious freedom, human rights, and rule of law.