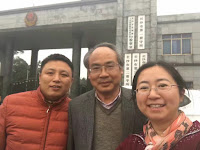 Human rights lawyer reveals torture; says any future confession would ‘not be out of my own will’

(Changsha, Hunan—March 7, 2017) An incarcerated human rights lawyer from China’s central Hunan province declared his innocence and revealed that he is being subjected to severe torture in a letter on Jan. 13, China Aid learned today.

Imprisoned since July 11, 2015, for his defense of human rights, lawyer Xie Yang wrote that officials have been subjecting him to “severe abuse and torture” in order to coerce him to confess. However, because he is not guilty of any crime, he writes that he is refusing and will only comply if the torture becomes too much for him to bear or authorities bait him with bail and a reunion with his loved ones. As such, he says, “If someday I admit any guilt, whether in written form or voice recording, it would definitely not be out of my own will.”

Xie’s lawyer, Chen Jiangang published the “Transcript of Interviews with Lawyer Xie Yang,” revealing that his client was repeatedly dragged away from cameras and beaten, forced to sit on stacked chairs until his legs swelled and it became impossible to walk, denied water, made to inhale cigarette smoke until he choked and suffocated, and subjected to other acts of torment. Additionally, according to an excerpt of the transcript posted by China Change, officials threatened to place him in an oven and told him, “Xie Yang, if we want to kill you, it would be very simple. Killing you is the same as killing an ant!”

Due to the startling nature of the transcript’s content, many international media sources published articles denouncing China’s treatment of Xie. In response, China launched a propaganda campaign claiming that these reports were “fabricated,” denying Xie’s torture.

China Aid reports abuses, such as those suffered by Xie Yang, in order to stand in solidarity with the persecuted and promote religious freedom, human rights, and rule of law.

Today I met with my attorney, Chen Jiangang, again. All my statements here are completely true and out of a free heart. I want to declare that I am completely innocent.

I have been suffering from all kinds of severe abuse and torture since I was arrested on July 11, 2015. Nevertheless, I have never pled guilty, because I am not guilty.

If someday I admit any guilt, whether in written form or voice recording, it would definitely not be out of my own will. It would be either caused by continued torture or to get a chance to be bailed out and reunited with my family. Both my family and I are under immense pressure now as the officials ask me to confess and stop talking about my torture.

Once again, I am innocent.