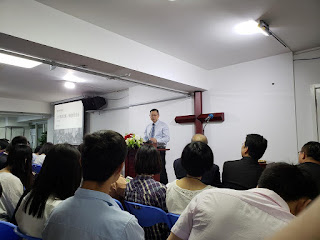 (Chengdu, Sichuan—May 16, 2018) 100 policemen lay in wait for the members of Autumn Rain Blessing Church on Saturday in Chengdu, Sichuan, seizing more than 200 Christians for holding a memorial service honoring the 10th anniversary of an earthquake that devastated the area.

The night before, officers visited the church’s pastor, Wang Yi, at his home and informed him that the gathering violated Article 69 of the Religious Affairs Regulations, which prohibits the establishment of religious venues without government approval. Since Autumn Rain Blessing Church is not registered as a government-run Three-Self Church, which are commonly censored and monitored by officials, it is not considered a legal religious venue. As such, the official ordered Wang to cancel the memorial or face legal consequences.

Afterwards, a plainclothes officer gave Wang a subpoena, accused him of “picking quarrels and provoking troubles,” and forced him to go to the Qingyang Police Station for investigation. When Wang questioned the police about how he can be given this charge while at home and not in a place where he could start fights or trouble, they responded, “You are charged with picking quarrels and provoking trouble on the internet.”

They also took Li Yingqiang, a man who preaches at the church, was also taken into custody that night.

The same night, 500 government agents surrounded Autumn Rain Blessing Church and waited until Christians arrived the next morning. At 7:30 a.m. on May 12, some of the church members came for a morning prayer service, but the police prevented them from getting to their meeting room and later brought more than 30 of them to the police cars, and they placed several under house arrest. As the word spread, more Christians came to the church and prayed in the church’s lower levels. The police arrested 40 of them.

At 9:20 a.m., the authorities took 50 more church members into custody, including senior citizens and 11 children, handcuffing some of them. Some of the Christians argued with the police, while others stood to the side and sang Amazing Grace. Police also took cell phones from the church members and prohibited an elderly person from using the restroom.

One of the Christians was brought to the Qingyang District Dismissal Center, and a policeman in casual clothing treated him brutally. He was taken to the Caoshijie Police Station and was released two hours later.

Some of the arrested Christians were detained in a room with more than 20 officers guarding the door.

Authorities also beat and insulted some of the Christians.

Saturday evening, Wang and Li were released, and Wang preached a sermon on martyrs on Sunday, titled, “The Path of the Cross, the Cry of the Martyrs,” even though the church had been officially banned.

Preliminary statistics indicate that more than 200 church members were arrested, and three of them are still in prison. Additionally, police confiscated 15,600 Bibles, religious materials, and 930 DVDs.

In a statement, the church accused the officials of violating the Criminal Law of the People’s Republic of China by illegally depriving citizens of freedom of religion. It said that it plans report the abuses conducted against, accuse abusers of the law, and file a lawsuit.

“ … we do not hate the officers, policemen, [government] decision makers, and [government] supervisors involved in the event,” the statement reads. “Rather, we hope that some of them will confess, repent and follow the Lord, much more strongly than the hope that they will be punished. Our church is willing to conduct peaceful dialogues about our faith with the government at any time. Our church is willing to give up resorting to legal means for the sake of the Gospel and the hope of harmony. However, we will never compromise our conscience or faith and will lean on the cross when confronting anti-church authorities and being severely repressed.”

“ … I feel grateful on our behalf that we did not spend the day fleeing, retreating, and hiding; instead, we welcomed it with praise and excitement,” Wang said.

ChinaAid exposes abuses, such as those suffered by Autumn Rain Blessing Church, in order to stand in solidarity with persecuted Christians and promote religious freedom, human rights, and rule of law.