In a mass police action, all of Shouwang Church's leaders detained or put under house arrest 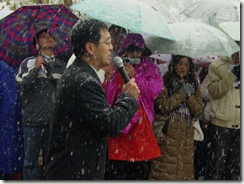 China Aid Association
(Beijing – April 16, 2011) In a mass police action, Beijing authorities on Saturday detained at least two pastors of the Beijing house church that tried to worship outdoors last weekend and have put all its lay leaders under house arrest, church sources told ChinaAid.
(File photo: On Nov. 1, 2009, Shouwang Church was forced to meet in Haidian Park, where Pastor Jin Tianming preached in the midst of a snowstorm. The church continued its outdoor worship the following Sunday, Nov. 8, but at  9 a.m., Pastor Jin was taken away by officers of the Domestic Securityr Bureau and held for more than three hours. The other church leaders and church members were stopped at the entrance of the park and not allowed to enter. They persisted in holding a 45-minute worship service before dispersing. ChinaAid’s Nov. 2 2009 report is here: https://chinaaid.org/2009/11/shouwang-church-members-forced-to-sing.html)

Meanwhile, many members of the Shouwang Church, one of Beijing’s largest house churches with about 1,000 members, have been forced out of their homes by landlords who have come under intense pressure to evict them, and others have been fired from their jobs for worshipping at Shouwang Church, according to a church leader.
ChinaAid Association calls on evangelical organizations worldwide, including the World Evangelical Alliance and the National Association for Evangelicals, to speak up on behalf of these persecuted believers.
“This is a critical time for global church leaders like WEA and NAE to speak up for fellow brothers and sisters in China,” said ChinaAid founder and president Bob Fu. “God and his persecuted church will hold us accountable if we keep silent when we know clearly what we can and should do for our persecuted body of Christ. We urge the Chinese government to exercise restraint and refrain from using violence that would further escalate the conflict with peaceful Shouwang worshippers who ask for nothing more than simply to exercise their right to religious freedom.”
Senior Pastor Jin Tianming, who founded Shouwang Church in the 1990s, was taken away by officers of the Public Security Bureau at 8 p.m. His whereabouts are unknown. Another pastor, Li Xiaobai, and Li’s wife were also taken away by Public Security officers. The couple had been the longest-held following last Sunday’s attempt at outdoor worship, and were not released until Tuesday.
The church’s other two pastors and all its elders and deacons are now under house arrest.
The church has made clear its intention of continuing to worship outdoors this Sunday at the same location in western Beijing’s Haidian district. Hundreds of church members turned up at the designated outdoor meeting site last Sunday only to be confronted with more than 300 police officers who rounded up at least 169 people, herded them onto buses and detained them for hours in police stations and a nearby elementary school, where they were interrogated and fingerprinted.
One of the most recent prayer requests distributed by the church leadership to its members says, “Pray for our dear brothers and sisters ….  May God give everyone an extra measure of strength! And may God have mercy on those in authority, to soften their hearts, so that they do not misuse the authority given them by God to oppress the people.
“Tomorrow is Sunday again. We are still under house arrest, and I expect that many others also will not be allowed to leave their homes. For those brothers and sisters who will be able to go out, who knows what will await them. We earnestly seek God’s protection for them!”
Shouwang Church made the controversial decision to meet outdoors after being evicted from its latest indoor meeting place, leased premises in a restaurant. The church in November 2009 had met outdoors twice, once in the midst of an early winter snowstorm, when it was unable to take possession of one floor of a building it had purchased for more than $4 million because the seller, under pressure from the government, refused to hand over the keys. In the face of that continued stalemate and unable to find an alternative meeting site large enough for its growing congregation, Shouwang leaders decided that meeting outdoors was the only choice.
Their move has garnered the support of other large house churches in the capital, which further heightens the stakes in this church-state standoff. On Friday, at least 14 other large house churches in Beijing, all members of the Beijing Ministerial Prayer Fellowship, issued a statement saying they are holding a weekly prayer vigil for Shouwang.