In tears, victim denounces the violence committed by family planning officials in Guizhou in early 2013 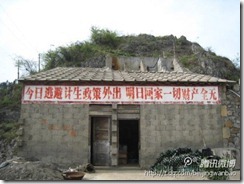 They denounce and recall the bloody family planning policy of the past 30 years and the mental and physical harm it has done to every family and woman in China.  Following is a letter and a tearful account from this victim.

Following is an incident of injury that happened to my family:

Shortly after 9 o’clock on the morning of February 1, 2013, my wife, Nie Changmin, was on her way to a hospital with our 3.5-year-old daughter who was sick.  As she was riding a motorcycle on the village trail of Jingjiatun Group 3, suddenly seven or eight people (two of them men) confronted her.  Their first words were to ask whether my wife had had a sterilization.  My wife replied that she had an IUD device installed in her back in 2009, but the family planning station had not given us a certificate of proof at that time.  When these seven or eight people heard it, they all jumped on her at the same time without hearing anything else she had to say.  They forcefully snatched her from the motorcycle and dragged her for 70 to 80 yards.  This assault caused our little daughter to be injured with scratches, and my wife lost her shoes while being dragged away.  She was kicked in the body several times; the motorcycle was pushed to the ground and damaged, and while being dragged away, she lost one of her earrings.  It was a mess at the scene!  She was dragged by force into a van, which took her to Xiawutun Family Planning Station and directly into an operating room, where a sterilization operation was performed on her.

At about 11 o’clock on the morning of the same day, my mother, Geng Xuefen, father-in-law Nie Guangrong, and my sister Wang Xianmei arrived at the family planning station after hearing the news.  They asked for the whereabouts of my wife and little daughter.  The people at the family planning station said the child was there and they could take her away, but my wife was still in the operating room.  My family members requested that they see Nie Changmin but were not allowed to do so.  My mother, Geng Xuefen, replied that since the country is ruled by the Communist Party, everything should be done according to reason, that it is not a country ruled by Kuomintang.  When the family planning people heard this, they began to quarrel with the family members and became verbally abusive.  Then they pushed Geng Xuefen and Nie Guangrong, elderly people in their sixties.  They pushed Geng Xuefen onto the floor and pinned Nie Guangrong onto a flower platform.  When my sister, Wang Xianmei, saw this, she took out her cell phone to take a photo of the scene, but her cell phone was snatched  away by these scoundrels, and she was also pushed to the floor.

After 1 o’clock in the afternoon, I got the news and arrived at Xiawutun Family Planning Station. The employees there placed my wife, Nie Changmin, on a cart to transport her to a place for an intravenous infusion.  (Usually one doesn’t need infusion of fluid for such an operation.)  When my sister Wang Xianmei saw this, she asked for the reason.  The employees replied, “Only people under special care can enjoy this infusion of fluid.”  After that, my wife, Nie Changmin, was hauled away by them to Xingyi City Maternity and Child Care Hospital for infusion of fluid.  We learned later that an accident happened during the sterilization operation on my wife causing the wound to be unable to heal.  Afterward, her condition continued to worsen, and her health was seriously compromised.  Today she continues to have a wound infection, with pus pouring from it so it is not yet healed.  She is still hospitalized.

In summary, these seven or eight employees of Xiawutun Family Planning Station enforced the law in such an aggressive and brutal manner!  They totally ignored the legitimate legal rights of the victims and did things according to their own thoughts.  They forced the operation on my wife which resulted in serious consequences, causing my wife to still require treatment at this time.  In the meantime, they seriously scared a child of only three and a half years old, injured two elderly people in their sixties, causing minor injuries.  Also, our motorcycle, cell phone and shoes are either damaged or lost.  Our question is:  Where is the law of the state?

In fact, our family has always supported and abided by the family planning policy of the state.  In the latter half of 2009, after my wife, Nie Changmin, gave birth to our second child (both of our children are daughters), she had an IUD installed on her own initiative.  In the three-plus years since the installation, the people from the family planning station have never come to our house to ask about family planning matters or demanded that we have a sterilization.  Now, though, they have suddenly forced her to have the operation!  How can a family accept such a rude, brutal, and evil conduct?  How can the common people understand why there are persons who are allowed to enforce the law in such a manner?  This is not the first instance in which the employees of Xiawutun Family Planning Station have enforced the law in such a violent way.  How can such people represent the state?