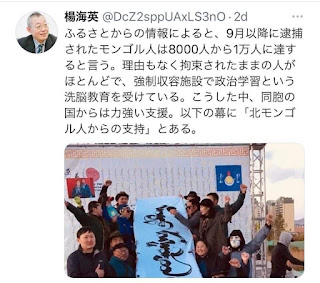 In Xinjiang, authorities have even detained a minority, middle-school math teacher in a concentration camp. In Xinjiang, according to investigations by international organizations, authorities place Uyghurs under systematic surveillance, as well as harasses and persecute them. The UN anticipates that approximately one million Uyghurs are detained in Xinjiang’s detention camps. CCP leaders deny the existence of these detention camps, however, and use the term “vocation training centers” for facilities former “graduates” know as prisons.

Since September, as people in Inner Mongolia have been fighting against the CCP’s education reform, the humanitarian crisis in this area has escalated. The CCP has illegally arrested approximately 8,000 to 10,000 Inner Mongolian people, forcibly detaining them in the “re-education camps” intending to brainwash them. Authorities have facilitated numerous forcible disappearances of others. Nine individuals have committed suicide in response to the CCP’s educational heist including one principal who jumped off a high building.

The Southern Mongolian Human Rights Information Center asserts that Inner Mongolia has become a police society. As CCP authorities carry out their plans, Ms. Cai Xia, a former professor of the Party School of the Central Committee of CPC, retweeted a “tweet” regarding the Inner Magnolia humanitarian crisis and added that China is a super large concentration camp.

People fighting the threat of Inner Mongolia becoming another Xinjiang call for the attention of the global community: We need your help, please retweet [share this] so that more people know the calamity that is happening here….