As Chinese Communists Party (CCP) authorities have reportedly subjected Pastor Wang to various types of abuse such as “closed” confinement and other cruel tactics, they continue to harass his parents, his wife Jiang Rong, their son Wang Shuya outside prison. While Pastor Wang serves his nine-years sentence at Chengdu Jintang Prison, CCP authorities have stripped the fundamental rights of Ms. Jiang Rong, their son, and his parents, rights reportedly guaranteed by Chinese law. Prison officials prohibit family members from visiting Pastor Wang. Chengdu State Security forces, and also limit information they relate to his family.

According to Jintang prison regulations, when authorities initially imprison inmates at this location from the detention house,* they send them to join a group of new inmates, known as the cell block’s training team. ChinaAid’s informant, however, confirmed that prison officials failed to send Pastor Wang to this “training team.” Other inmates in the prison’s cafeteria and cell blocks reported that they have also not met or even heard of anyone Pastor Wang Yi. 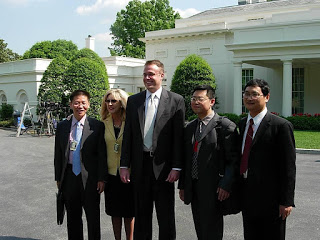 Pastor Wang Yi (second from right) outside of White House on a trip to Washington, D.C., in 2006.
(Photo: ChinaAid resource)

The Chengdu National Security police officers have used various methods to insult, threaten, intimidate, and harass Pastor Wang’s family, as well as Christians in Early Rain Covenant Church (ERCC). They have restricted his wife’s liberty and used his treatment in prison as leverage to keep her from contacting other ERCC members. As police have installed 360-degree cameras in the room Ms. Jiang stays in and in her bathroom, they have invaded and completely control her privacy.

Chengdu National Security police officers also arbitrarily raided the residence of Pastor Wang’s parents (in their eighties). During the raid, attempting to humiliate them, several police ordered the couple to put their legs together, stand at attention, and maintain an upright position for an extended period. In addition, plain-clothed police continually monitor Pastor Wang’s son, a minor. Officers transport him to and from his school. Due to years of CCP monitoring, stalking, and hostile behaviors, Wang has become withdrawn, uncommunicative, and uncommonly quiet.
~ Gao Zhensai, ChinaAid Special Correspondent
*A detention house, a public security organ temporarily detains criminal suspects (holds defendants suspected of criminal offenses). Courts have not yet issued a judicial decision for these detainees.

Imprisoned Pastor Wang Yi’s poem, Miss my Son, reflects our Heavenly Father’s love
###
However, we speak wisdom among those who are mature,
yet not the wisdom of this age,
nor of the rulers of this age,
who are coming to nothing.
~  1 Corinthians 2:6 (NKJV)
China Aid exposes abuses in order to stand in solidarity with the persecuted and promote religious freedom, human rights, and rule of law. If you wish to partner with us in helping those persecuted by the Chinese government, please click the button below to make a charitable donation.