On July 9, Wang Yu, a celebrated human rights lawyer in Beijing with a history of defending religious minorities and political dissidents in China, sent a text message to her friend. Her electricity had been cut off and her phone line was dead: “People are trying to break in,” she said.

Wang, 44, had returned from dropping her husband and son off at Beijing airport and neighbours later said that there was a heavy police presence in the neighbourhood. When they asked why, officers said that there had been a drugs bust nearby and that one person had been detained.

Wang has not been heard from since, even by her lawyers, who have claimed that not only had they been forbidden from seeing their client but they still hadn’t been told what she had been charged with. Her husband and son were arrested at Beijing airport but later released.

Her arrest came ahead of a crackdown in China that saw 200 lawyers detained in just seven days. As of this week, activists say, most of those that were detained a month ago have been released, but Wang and at least six other lawyers have not. Albert Ho, the chairman of the China Human Rights Lawyer Concern Group in Hong Kong, said that the current crackdown is China’s worst yet. 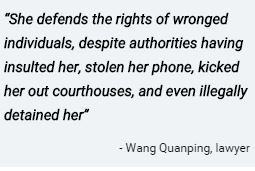 “The crackdown is on the widest scale that we have ever seen. At least 270 lawyers were arrested, detained, intimidated. Up to now at least seven are still detained under the pretext of violation of the law relating to the protection of national security,” Ho said.

In Wang’s case, according to an August 10 letter from her lawyers to the Tianjin Public Security Bureau, which is believed to be responsible for her arrest, the charge appears to relate to a court case in the north-eastern city of Shenyang City, when Wang is accused of branding the police “animals and thugs”.

Her lawyers argue that not only is it unusual to classify a loss of temper as a national security issue, but rather that it is Wang’s record of defending religious minorities including the Falun Gong, Christians and political dissidents against the government and local officials that is behind her arrest.

She has been handling political cases for almost five years, and has defended scholar Ilham Tohti, who was sentenced to life imprisonment in January 2014 for his role in the Uighur movement in western China, and five LGBT activists who were jailed in January for “creating a disturbance” when they organised an anti-sexual harassment campaign for International Women’s Day.

“She is a brave, forthright, selfless human rights lawyer. Most of the time she is on the road, seeking justice and defending the rights of wronged individuals, despite authorities having insulted her, stolen her phone, kicked her out courthouses, and even illegally detained her,” a friend and former colleague, Wang Quanping, said in a statement following her arrest.

“She was never afraid, and continued to fight against violations committed by the authorities. She does not care for fame, or to make big money, but tirelessly works on many difficult and risky rights cases, in pursuit of legal justice. […] She is the pride of Chinese lawyers.”

According to her profile on the website of activist group China Human Rights Defenders, Wang switched from commercial to human rights law after she was physically assaulted by ticket inspectors in 2008 while trying to board a train. She made a complaint to the police but was herself arrested for assault, fined US$20,000 and jailed for three years. She was only released in 2011.

A few days after Wang’s arrest in July, state-owned Xinhua news agency published an article attacking the law firm that she worked for, Fengrui, which is known for handling human rights cases. Immediately following Wang’s arrest, 100 of her colleagues had signed a petition calling for her release and many were then arrested themselves.

In the article, Xinhua compared Fengrui to “a major criminal gang” that “aim[s] to create disturbances and disturb order” in the name of “defending [human] rights.” A week later, the state media arm carried a confession by one of the firm’s directors, Zhou Shifeng, in which he said that the firm “had broken the law” and “brought great risks to social stability.” 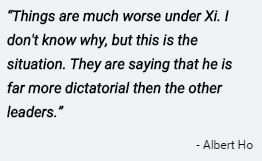 It is believed that the crackdown was provoked after Chinese state security shot dead a young man in the northern Heilongjiang province in late June, claiming that he had been resisting arrest. A video was later uploaded to the internet by human rights lawyers that called into question the police account of events. A protest was held at the train station by the victim’s family and claims of a cover-up spread.

“I think this was the straw that broke the camel’s back because the human rights lawyers had been causing a great deal of problems for the government for years,” said Ho, most controversially a campaign against illegal detention of political activists in so-called “black jails”.

“For years, the number of lawyers in the movement has been increasing. I am seeing young faces coming in,” he said.

When Chinese president Xi Jinping took power in 2012 there was little indication that he would any more inclined to political reform than outgoing premier Hu Jintao, but the speed with which political freedom has been eroded in China under Xi has shocked many observers, including US President Barack Obama, who warned of Xi’s “clout” inside China as recently as December 2014.

In a speech in the US, Obama said that the new president had consolidated power in the country faster than any Chinese premier since Deng Xiaoping, the reformist leader that opened China to capitalism with a series of market reforms in the 1980s after the death of Mao. Obama warned of the threat that Xi Jinping presented towards human rights in particular.

Although Xi’s anti-corruption drive, which has seen many high-ranking officials stripped of their positions and dragged through China’s courts, was received positively when it was launched in 2013, it has increasingly been seen as a tool for removing political opponents and crushing dissent. The case of dissident artist Ai Wei Wei, who was charged with tax evasion in 2011, is a case in point.

It has come at a time when China’s nationalist sentiments have been stirred by arguments with Japan over the possession of islands in the South China Sea and the protests in Hong Kong, which came after Beijing attempted to vet candidates ahead of the islands’ 2017 elections. Xi’s premiership has also come as hacking accusations have soured relations between China and the US.

For China’s human rights lawyers, the wave of arrests do not bode well.

“Things are much worse under Xi. I don’t know why, but this is the situation. They are saying that he is far more dictatorial then the other leaders,” said Ho.

But he speculated that while Xi has total control over the army, he has less sway over the country’s internal security apparatus, which has increasingly become a law unto itself inside China.

“He is not in complete control of the security forces [and] some people seem to be doing things without his blessing,” he said.