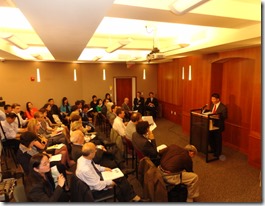 Comprised of a multitude of different backgrounds, these 30 international NGOs came together at this conference for one unified purpose – to call on President Obama to ask the Chinese leaders to release the 16 prisoners of conscience. Robert Menendez, senior United States senator from New Jersey, also issued a letter to President Obama. In the letter, President Obama was requested to bring up the issue of human rights during his meeting with President Jingping Xi. Menendez requested President Obama to stress that the Chinese government’s concrete action to improve the devastating human rights conditions is absolutely foundational to future US-China relations.

Barbara Weinstein, Director of the Commission of Social Action of Reform Judaism, presided the press conference. She briefly outlined the objective of this joint effort formed by the 30 international NGOs: to call on the Chinese government to immediately release the 16 dissidents, honor human rights, and establish rule of law. Crucial to the objective is a request that President Obama makes it clear during his meeting with President Xi that, among many other concerns, the issue that the US is most concerned with is about the human rights condition in China. The United States accepts and is willing to develop a collaborating relationship with China only if they truly commit to protecting human rights and allow themselves to be truly ruled by laws. 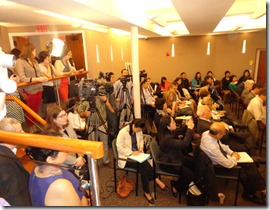 The eminent blind human rights defense lawyer, Chen Guangcheng, joined the press talk online. He supported the joint effort of the human rights alliance. He also vowed to continue calling on leaders of countries all over the world not to gain economical benefits at the cost of compromising moral values and principles. Chen pointed out that under the current social and political situations in China, this issue regarding human rights deserves equal, if not more, attention than the economical and diplomatic issues. Human rights and dignity must be respected. “Being united in one will make this possible,” Chen remarked. Facing the totalitarian tyranny, we should not fear or compromise. He felt that Chinese people are already awake, and China will inevitably come to the point where real changes are about to occur.

Rev. Bob Fu, the president of ChinaAid Association, introduced in the conference the relatives of some of the 16 prisoners: Jiaying Peng – Ming Peng’s daughter, Tianan Wang – Bingzhang Wang’s daughter, Qiao Chen – Xianbin Liu’s daughter, Danielle – Zhiwen Wang’s daughter, and Jiaofu Zhu and Qiaoguan Zhu – Yufu Zhu’s younger brother and sister, respectively. Rev. Fu briefly touched on some facts about these 16 dissidents: four of them have been sentenced to life terms and the rest sentenced to a combined 165 years imprisonment. Tragically, the children of the prisoners grew up with no parents, and their loved ones were deprived of freedom solely because they decided to exercise their right to freedom of speech and religion. Through these stories, one brutal fact has been made clear. The Chinese human rights condition is getting even worse than before. The way these dissidents are being treated reflects nothing but the immense gap between the highly propagandized “Chinese dream” and the true reality of the human rights condition in China.

Qiao Chen, the daughter of Xianbin Liu, recalls that the time she spent with her father over the past 16 years of her life totaled less than two years. When she was younger, she didn’t understand her father. At times, she even hated him for not being able to be with her. As she grew older, things became clear to her. For the first time, she began to feel proud of him – proud that her father was imprisoned because of his relentless and courageous fight for freedom and democracy. She called on President Obama to be mindful of the importance of human rights as he planned to meet with President Xi. Chen not only appeals to the Chinese government for immediate release of her father, but she also hopes that thousands of others who are in the similar situations would one day gain freedom. As she shared of her experience, her tears and sobs brought a sobering heaviness into the audience.

Next, Jiaying Peng, the daughter of Mr. Ming Peng who was sentenced to life imprisonment, shared the story of her father. The last time she saw him was in 2003. In 2004, her dad bought tickets for Jiaying and her brother to visit him in San Francisco. But before the flight, her dad was abducted by the Chinese secret agents during his visit to Burma, taken back to China, and sentenced to life in prison. The plane tickets were never used. She remembers her dad to be an outstanding and extraordinarily upright human being. He was not only knowledgeable and skillful, but also ambitious in his pursuit of human rights and democracy in China. She also called on President Obama to courageously confront the Chinese leaders who completely disregard human rights. She appealed for him to stand up for human dignity and values and uphold, with zero compromise, the principles we treasure as a free society. Jiaying, an outstanding student, is also the president of the student government in her school. Comparing to her peers, Jiaying is very confident and rational when it comes to problem solving. 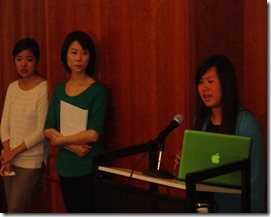 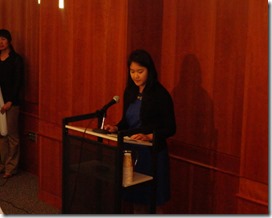 Qiaofu Zhu then shared about the experience of his older brother Yufu Zhu, a prisoner of conscience from Zhejiang province. Yufu was jailed three times due to his advocacy for freedom and democracy in China. Qiaofu and his sister came to the United States to appeal to the American government and international community to rescue their brother.

Next was Tianan Wang, the daughter of political dissident Bingzhang Wang. Since her last visit to her dad’s prison in China, Tianan has never been able to obtain a visa to go visit him again. Because of the long-term imprisonment, her father has suffered through much sickness. He has already suffered a stroke several times. She called on the Chinese government to at least honor humanitarianism, and let her visit her father. Her biggest hope is that her dad returns home alive. To save her father, Tianan learned Chinese and is trying all possible ways to get his father out of the prison.

Zhiwen Wang, a former engineer of the railway department, was sentenced to a 16-year imprisonment because he practiced Falungong. His daughter, Danielle, described the torture her father underwent and the persecution her family experienced. She also highlighted the brutality of the Chinese government’s treatment of the Falungong practitioners. 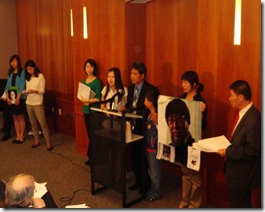 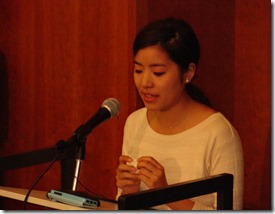 Throughout the conference, those in the audience were shocked as they listened to these heartbreaking stories. Many tears were shed as the daughters of the innocent prisoners shared about the traumas they and their families experienced. Unfortunately, among the invited 16 prisoners’ family members, some were unable to make it to the conference, such as the relatives of the four prisoners who are ethnic minorities (two are Tibetans and the other two Uyghurs).

Frank Jannuzi, Deputy Executive Director of Amnesty International USA, and Todd Stein, Director of Government Relations at International Campaign for Tibet, also made important remarks. They highlighted the steady deterioration of the human rights condition in China and also called on President Obama to raise this issue with President Xi. 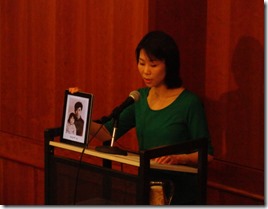 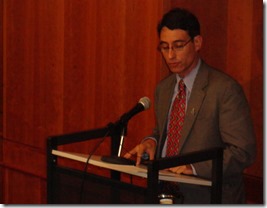 Michael Horowitz, a Senior Advisor on coalition building of the Religious Action Center and a former legal advisor for the Reagan Administration, has long been concerned with freedom of speech and religion in China. He commented, “a society becomes dangerous if it has no respect for human dignity and freedom and implements no ‘real’ rule of law.” He proclaimed that when it comes to dealing with China, the western countries, especially the United States, have neglected their fundamental values and beliefs of fighting for human rights and freedom. These foundational values are principles every civilized society should keep. Mr. Horowitz recalled that in the Reagan Era, the United States insisted not to overlook issues about human rights and carry on to other issues when dealing with the communist Soviet Union. As a result, real changes occurred in the Soviet Union. If we let China, a nation that completely disregards the importance of human rights, rise and flourish, if we continue to let the United States sell out our fundamental values and principles and let it be concerned with only economical collaboration, then the human society will face severe consequences. Furthermore, the consequences future generations will face will be even more severe. Mr. Horowitz called on the Obama Administration to take a stand, not in word but in deed, and to hold on to our morals and values when working with countries like China. He urged Obama to declare to the Chinese government that a mandatory condition for partnering with the United States is a true respect for human freedom and values and a strict implementation of the rule of law. 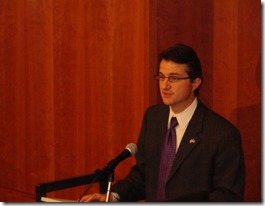 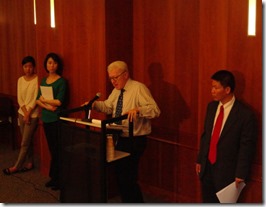 At the conclusion of the press conference, many news agencies interviewed the conference organizers and the relatives of the prisoners of conscience. Our sincere hope is that the international NGO alliance would continue to work collaboratively. ChinaAid will continue to work with the international community to fight for the progress of religious freedom and human rights in China.