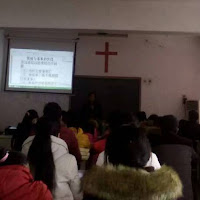 (Tianjin—Dec. 21, 2017) Government departments are conducting an investigation of Christians in Tianjin and China’s southern Guangdong and northern Hebei provinces, and some Christians speculate that this probing into religious affairs may soon spread nationwide.

The United Front Work Department of the Tianjin University of Finance and Economics ordered a search into the religious background of all the school’s teachers and students—including those from Hong Kong, Macao, Taiwan, and all nations not under the control of the Communist Party—in order to record the number of Christians and their names, determine whether there are Christian missionary programs and gathering places on the campus, discover the way the mission work is conducted, and ascertain the number of people attending each mission work gathering. In a notice, the department urged its subordinate committees and Party branches to implement the anti-religious sentiments of the 19th National People’s Congress and Chinese President Xi Jinping’s speech during the National Conference on Religious Work, which promoted the idea of subjecting religion to persecution and censorship in order to tailor it to the Communist Party’s agenda.

The notice also calls for all grassroots Party committees to submit a written report of their findings to the United Front Work Department by Dec. 13.

Similarly, an anonymous Christian in Hangzhou, Zhejiang, alerted ChinaAid on Dec. 13 that the local government sent a similar document to elementary and middle schools two months ago, ordering an investigation into the religious background of the students in order to ascertain whether or not their parents are religious.

“Next, I think the government will expand the investigation to the entire nation,” the Christian said.

In Guangzhou, the in
vestigation shifted its focus, scrutinizing several house churches’ sources of funding, their staff composition, the names and ages of the Christians attending, and whether or not they had connections to Korean church’s or foreign religious organizations.

In addition, a man surnamed Li, who pastors a church in Beijing, said that officials closed three churches in the capital’s Shunyi District recently. Once the churches are found by the police, they are forced to move, because if they refuse, the police will keep visiting and harassing the church members, studying their ID cards, and inquiring about the number of people in attendance.

ChinaAid exposes abuses, such as those suffered by church members, in order to stand in solidarity with persecuted Christians and promote religious freedom, human rights, and rule of law.