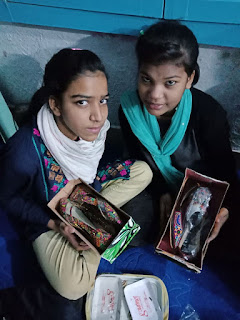 Warning: This story contains mentions of murder-suicide and sexual abuse.

(Lahore, Pakistan—Jan. 6, 2018) The legacy of a Chinese martyr in Pakistan continued on Dec. 22 when Pakistani children, some of them victims of human trafficking, received gifts.

The children obtained clothing items and other presents in celebration of the Christmas season. Distributed by UCO Pakistan, the gifts honor the memory of Meng Lisi, a 26 year-old Chinese missionary to Pakistan murdered by ISIS earlier this year. Meng, a teacher, was learning Urdu and felt God calling her to spread her faith among Pakistani schoolchildren when she and her fellow missionary, Li Xinheng, were kidnapped by the terrorist militia group on May 24. On June 8, ISIS announced that they had been killed.

When ChinaAid learned of Meng’s mission, they decided to take donations for Pakistani children in lieu of flowers at a memorial service held for Meng and Li. Partnering with UCO Pakistan, ChinaAid used the funds to fulfill Meng’s desire to reach Pakistani children.

Two of the children served that day, Ifia and Rickce, had been rescued out of human trafficking situations. Rickce, a 10 year-old girl, survived a murder-suicide attempt carried out by her mother, who jumped out of a building with the child in her arms after her father left the family. The ministry reports that she is now in their orphanage, which also functions as a safe house, where she is receiving treatment.

Ifia described her experiences as such: “I was born in a family where my mother and I used to make money by dancing in villages. One night, we were attacked by a gang, and my mother and I were brutally raped. My mother was killed, but I escaped death. I was mentally, emotionally, and physically wounded. I was rescued and taken to live in a safe house orphanage home with other girls like me. Since then, I’ve been counseled, prayed for, and shown the truth of how God sees me.”

After Meng and Li’s deaths, the Chinese government persecuted churches that sent them as missionaries, including a Korean church, and spread propaganda that called them disgraces to their nation. As a result, their parents have been cut off from church congregations.

ChinaAid partnered with organizations such as UCO Pakistan in order to carry out Meng’s calling and demonstrate that she and Li are not disgraces but rather honorable Chinese citizens who lived and died serving God and the nation of Pakistan. In addition, ChinaAid exposes the abuses enacted against them and their family in order to stand in solidarity with the persecuted church and promote religious freedom, human rights, and rule of law.