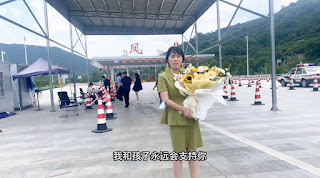 “It was their crime scene”: Wife of Chang Weiping prevented from attending trial

(Shaanxi province, China—July 28, 2022) The case of prominent Chinese human rights lawyer Chang Weiping was heard in secret on the morning of July 26 in remote Feng County, Shaanxi Province, and the court has not reached a verdict. The day before the trial, police and public security officers stopped Dr. Chen Zijuan, the wife of Chang Weiping, and her son on the highway for 20 hours. Chen and her son were unable to attend the trial, so Chen made a brief statement when she was on the road: “today’s trial wasn’t yours; instead, it was their crime scene.”

On the 25th, Feng County police and plainclothes officers came in unmarked vehicles and surrounded Dr. Chen Zijuan and her child on the highway. One of the vehicles had a rotatable surveillance camera mounted on the front aimed at Dr. Chen’s car. There were other police cars and police officers standing by, and they prevented Chen Zijuan from entering Feng County. The authorities used COVID-19 control measures as a false excuse to persuade her to return and also threatened her. The authorities exempted all other vehicles from the check, choosing to target only her vehicle and prevent her and her child from entering the city.

Because authorities coerced Chang Weiping’s defense attorney, Zhao, to sign a confidentiality agreement, he was also obstructed in the process of handling the case. He is not at liberty to disclose information about the case, and details of the trial remain unknown. The only thing that is clear is that Chang Weiping’s lawyer denied the prosecution’s accusations, believing himself to be not guilty.

According to Chinese practice on case verdicts, once a suspect has been formally arrested and prosecuted by the procuratorate, the suspect is rarely acquitted by the court; even more so in cases of political nature against pro-democracy activists because the Chinese judiciary does not have any independence. If the court acquits a suspect, doesn’t that mean that the Public Security Bureau and the Procuratorate have arrested the wrong person? The arrogance of power under the CCP system and the bureaucratic system that unites the three departments of the Public Security Bureau, the Procuratorate, and the Law will determine the fate of “political prisoners.” Since the case was wrongfully handled, the case will continue in the wrong direction.

At this time, it is unknown how Feng County’s court will sentence lawyer Chang Weiping.

While the trial of Chang Weiping was in progress, Dr. Chen Zijuan said, “The trial has begun, and my child and I are still blocked at the highway exit.”

Once authorities in Feng County determined that Dr. Chen missed her husband’s trial, the police released her. On the morning of the 26th, Chen gave a moving speech addressed to her husband at a highway intersection in Feng County with a bouquet of flowers in her hand:

“Today is your Good Friday; but at the same time, I think it is also your day of glory. I’m sorry that I could not be there with you in person, despite traveling more than 2,000 kilometers to witness the moment with you. But they wouldn’t allow it and blocked me on the highway for more than 10 hours …… No matter how they sentence you, it is an unjust trial. Today’s trial wasn’t yours; instead, it was their crime scene. The kids and I will always support you and we will wait for the day you return.”

There were several police cars parked behind her as she delivered her speech. Chen’s speech in the video was widely retweeted on Twitter, with more than 4,000 people liking it in support of her, and it was even transferred to social media inside the Chinese firewall, where it received a lot of solidarity from netizens.

The German Ambassador in Beijing expressed on Twitter: “A sad day for #humanrights in #China. Today, lawyer #ChangWeiping, last year’s winner of the German-French Human Rights Prize, faces a closed-door trial for ‘subverting state power’……We stand by his wife, family, friends and colleagues in calling on Chinese authorities to set him free.”

In a tweet, the British Embassy in Beijing commented, “#ChangWeiping, arrested in 2020 after raising issues of torture and #humanrights in China (including his own mistreatment) is today scheduled for trial behind closed doors. The UK calls for the release of all those currently detained for promoting fundamental rights and freedoms.”

But the U.S. side has remained unusually quiet.

Lawyer Chang Weiping has long shown concern and put his efforts into rights issues regarding the Chinese house church and those who faced discrimination over HIV and sexual orientation. In 2019, Chang Weiping participated in the “Xiamen Gathering” convened by human rights activists. His attendance led to him being placed under residential surveillance at a designated location (RSDL) for 12 days by the public security bureau in Baoji City, Shaanxi Province in January 2020. During his enforced disappearance he was tortured. The following year, Chang Weiping self-recorded a video clip, revealing that during the period he lost his freedom, he was subjected to torture; he was locked onto a “tiger chair” 24 hours a day for 10 days.

The tiger chair is a kind of torture that may lead to death: The public authorities tie the suspect to a long bench. The upper body and hands are tied behind the back. The legs are stretched out on the surface of the bench, attached to the wooden frame. Prisoners are tied right above the knees with ropes, and bricks are placed in the seam between the calves and the bench or under the heels. Their feet are lifted upward, causing great pain for the tortured prisoner by pulling the ligaments of the legs’ joints, which can easily lead to muscle tears or bruising.

On October 22, 2020, Chang was placed under residential surveillance on suspicion of “inciting subversion;” On April 7, 2021, he was arrested on suspicion of subversion of state power, and during a meeting with his lawyer, he revealed that he had been severely tortured while under residential surveillance. His case has been postponed several times without any reason. He is currently detained at Feng County Detention Center in Baoji City, Shaanxi Province.