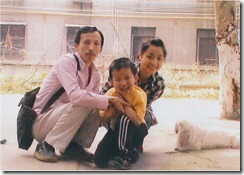 (Mianyang, Sichuan – Nov. 8, 2011) Government prosecutors handling the case of Sichuan activist Ding Mao, arrested for forwarding Twitter messages about the Arab “Jasmine Revolution” and charged with subversion, had demanded police for further investigations because of insufficient evidence and the case now have been sent back to prosecutors for the third time , ChinaAid has confirmed.

Meanwhile, his wife’s request to visit him on the eve of his birthday, which is Nov. 9, was denied.  None of his family members, including the couple’s six-year-old son, has seen Ding Mao since local police seized him from his home on Feb. 19.  He has been held in the Mianyang Detention Center.  In March 28, he was formally arrested on “suspicion of inciting subversion of state power.”

Ding’s wife, Feng Xia, a House Church Christian in Blessings of Autumn Rain House Church in Chengdu city, was notified on Oct. 24 that the case had been sent back to Mianyang Prosecutors from the Public Security Bureau (police) again as she was in the United States trying to draw attention to her husband’s case in an effort to win his release. During her three-week visit, she met with high-level U.S. government officials and congressional leaders as well as leaders from non-government organizations and the legal community.

When Feng flew back home on Sunday (Oct.6) from the United States, she was met at the airport in the provincial capital of Chengdu by a U.S. consulate official who was there to ensure that she was not harassed by Chinese government authorities in retaliation for her U.S. trip, and had a tea together.

The U.S. Consulate on Monday invited her for a formal one-hour meeting with three consular officials, during which she provided them details about her husband’s case and his health.  Ding, who weighs only about over 100 pounds and is physically weak, had had an excruciating toothache in April that made it impossible for him to sleep, and in August had had back pain.

Yesterday Feng also filed a formal application with government prosecutors for a birthday visit with her husband, or a phone call or permission to send a birthday cake to him. All were denied.

Police in Mianyang have barred Ding from meeting with a lawyer hired for him by his family because, according to police, the case “involved state secrets.”

At the time of his arrest, Ding was general manager of an investment company in Mianyang.  He is also a founder of the Social Democratic Party.  During the 1989 Tiananmen Square student democracy movement, Ding was a student of philosophy at Lanzhou University in Gansu province and became a student leader in the protests.

He has already spent about 9 years in jail during two previous imprisonments, first in 1989 and again in 1992 when he was arrested for organizing the Social Democratic Party.

Other cyber-dissidents and advocates of civil society were arrested at the same time as Ding. They include Chen Wei and Ran Yunfei, who were prosecuted on the same charge as Ding.  Ran was released in August but put under six-months of house arrest during which he is forbidden to express himself publicly.

They are among dozens of dissidents, activists and lawyers who have been illegally detained or who have disappeared into government custody since February. 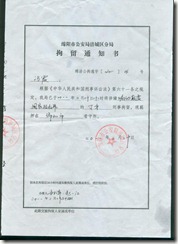 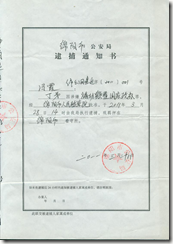