Translated by China Aid Association
Voice of America, Chinese Home Page
By Qi Yongming, Hong Kong, Sept. 14, 2011
Chinese human rights lawyer Jiang Tianyong has disclosed how he was physically and mentally tormented and destroyed during his recent detention.  When someone made a call on the Internet for a “Jasmine Stroll” this past February, Chinese authorities apprehended him and held him for two full months.  This is the first time since his April 19 release that Jiang Tianyong has spoken in public about his painful detention experience. 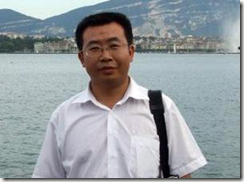 On the day before the first Jasmine Stroll, Jiang Tianyong was dragged away by the police and thrown into a vehicle.  This happened right in front of his family.  He was taken to an unknown location.  The police told him they were investigating him.  Lawyer Jiang Tianyong said, the “detention for investigation” law has already been abolished in China; hence an investigation like this was in fact illegal.  He asked his interrogators for the legal basis for their action, but they simply ignored matters of law.
Jiang Tianyong told VOA: “In detention, there’s no law to speak of.  As soon as I got there, they told me that in that place I must ‘follow their rules’ and that in there they ‘could follow the law, or not follow about the law.’  Those were their actual words.  At any rate, during that time and in that room, the law of the People’s Republic of China was null and void.”
During the 60 days of his detention, neither he himself nor any of his family members ever received any official notification, and no one knew where he was being held or whether he was dead or alive.
Jiang Tianyong is 40 years old this year and is known as one of the most prominent human rights lawyers in China.  Because he has taken on many human rights cases, he is often harassed and pressured by the authorities.
*He dropped nine kilograms lost because of physical and mental torture*
Jiang Tianyong said that in the two months he was in custody, he never saw sunlight.  Other than darkness, all he saw was the harsh light from the room’s light bulbs.
He told VOA: “I was in that one room the entire time, except for the times when I was transferred to two other places during that period, and even then, my head was covered throughout the whole process.  During that period, all I could see was the glaring white light in the room.  I don’t know how I got through the entire spring.  I didn’t see the sunlight of spring at all.”
Because of the physical and mental torture in detention, Jiang Tianyong’s weight quickly dropped nine kilograms (almost 20 pounds) in two months.
Hong Kong’s South China Morning Post said in a Wednesday report that on Sept. 19, after Jiang Tianyong was taken away in the afternoon, a hood was put on his head and he was brought into a room in the middle of the night where three people interrogated him. 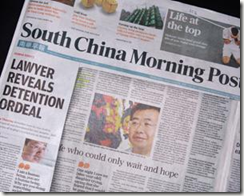 South China Morning Post carried an article on Jiang Tianyong exposing the ordeal he suffered during the detention. (Photo credit: Qi Yongming from VOA.)
Using bottles filled with water, these people hit him on the head and body, pinched his face and relentlessly verbally abused and insulted him and threatened.
Beginning on the third day, the police required Jiang Tianyong to follow their rules and get up every day, shout “report!” and “I am willing to accept the education of the government!”  After that, he was required to recite the lyrics of three so-called patriotic songs that his guards required him to.  If there was a slightest error, he had to start from the beginning again.
*Interrogated at any time, no guarantee of sleep*
While he could count on getting three meals a day, the rest of the time, he was required to “reflect.”  He was required to sit straight and face the wall with his hands on his knees.  Any slight move would bring rebukes.
Though he was allowed to sleep, the police told him: “If we want to educate you when you are resting, just consider it your bad luck.”
The first five nights after he was detained, Jiang Tianyong got almost no sleep at all.  Every day, he was interrogated from midnight to 6 a.m.  He said that during the interrogation, it seemed as if they were entirely in control of Chinese law.
He told VOA: “They clearly told me: ‘Don’t expect to go through any legal procedures or go to a detention center, let alone have any illusions of going to court.  Forget those dreams.’ That’s exactly what they said to me.  They told me that they could keep me in this state for a month, six months, a year or even longer.”
*Physical and verbal abuses from the police could cause schizophrenia at any time*
In addition to the the severe beatings and physical punishment he was subjected to in the first days of his detention, Jiang Tianyong suffered nearly continuous verbal abuse in the nearly two months after that.
Jiang Tianyong said: “When I was doing their ‘reflections’ there, I felt I could go crazy at any time.”
He said that during those two months, Ministry of State Security agents would come to talk with him whenever they liked.  When they conducted the brainwashing, which they called “rescue and education,” he had to listen to them.  He felt he would go mad at any time, that he could become schizoid at any moment and might leap up at any moment and beat them severely.  Any of this could have happened.
Jiang Tianyong’s ability to remember things has declined due to the severe mental torture and the lack of proper rest.  He said his memory used to be excellent, but after his release, he found he would forget in an instant things that used to be firmly fixed in his mind and be unable to remember them again.  This includes the arrangement of furniture in his bedroom and even the password of his Skype account that he has used for many years.  He said: “I don’t think this ever happened before.”
Jiang Tianyong said, the reason the authorities carried out the two-month forced disappearance was because they want him to experience terror.  And if he doesn’t speak out and tell people what he went through, the authorities would have achieved what their goal in their threats.
*Jiang Tianyong: serious problems in new provision for residential surveillance*
He pointed out that the authorities have invented “forced disappearance” and they behave like scoundrels in adopting an attitude to the outside world of “admit nothing, reveal nothing.”  Even the victims’ family members have no way of getting any information about what has happened to their loved ones.  But, in comparison with this, the proposed amendment to the current criminal procedure law in China is even more terrifying.
He said: “We see in this ‘solicitation of opinions’ draft a very serious problem with regard to residential surveillance.  If this criminal procedure law is passed as written, then when what we have experienced happens again, the authorities will be able to say to the whole world with all confidence and self-righteousness, ‘We are doing this in accordance with the law.’  I think this is even more terrifying.  Once this provision is passed, acts that are now still illegal, such as forced disappearance and the like, will become legal!”
*Jiang Tianyong won the “Prize for Outstanding Democracy Activist in China”*

On Sept. 10, Jiang Tianyong won the “Prize for Outstanding Democracy Activist in China” issued by San Francisco-based “Chinese Democracy Education Foundation.”  He said his experiences prove that the status quo must change.  He cannot imagine his child’s future living in a place like this where there is no freedom.
Jiang Tianyong was once a high-school teacher.  He started practicing law in 2005, and since then, most of his cases have something to do with basic human rights.  He is under constant pressure from the authorities, but he always persists to the end.  He is known as one who disregards the Communist Party’s pressures and is one of the most prominent human rights lawyers in China who has long been engaged in defending downtrodden social groups.