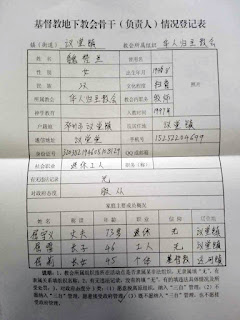 Local government departments in Jiangsu began executing a new operation with the objective of scrutinizing house churches and registering the family of church leaders. On Saturday, the government required Wei Zhelan, who pastors the Chinese Guizhu Church in Xuzhou, Jiangsu, to fill out an “Underground Christian Church Key Staff (Leaders) Information Registration Form,” which asked for her name, her date of birth, the name of her church, her position at the church, her I.D. card number, attitude towards the government, etc. When Wei asked the reasons behind the form, one official replied the Communist Party suspects that “fake believers” came to the worship services in order to deceive the Christians. He also said that the government had already registered her church.

One of the form’s columns, labeled “statement,” asked whether the church’s building belongs to an illegal organization, if it has a criminal history, and if the church is willing to accept the leadership of China’s state-run Christian organization, the Three-Self Patriotic Movement.

Other church leaders from the region received the same form and were required to fill it out.

On Aug. 28, the United Front Work Department in the Jiawang District of Xuzhou reported that the Daquan Sub-district Office had launched an investigation of all the local house churches, demanding to know about their locations, leaders, pastors, key staff members, number of attendees, interaction with foreign Christians, and future plans for development. Government agents were ordered to visit the sites and report to their superiors.

The report also said that officials either forcibly merge smaller groups of house churches into larger ones, transform them into Three-Self Churches, register them, or ban them. The operation’s objective is to standardize Christian activities.

Regarding the possibility of her members of her church attending the nearest Three-Self Church, Wei said, “It’s too far away. We can’t go there. I’m over 60 now, and I can’t go there. It’s dozens of miles away.”

These new, restrictive actions worry Christians, who fear the persecution might worsen as policies grow harsher.

ChinaAid exposes abuses, such as those suffered by Christians in Jiangsu province, in order to stand in solidarity with persecuted Christians and promote religious freedom, human rights, and rule of law.