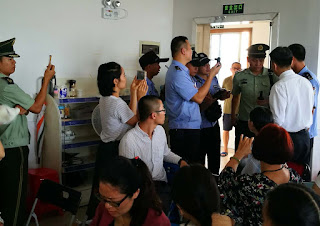 During the raid, authorities accused Dao’en Church of conducting illegal religious activities and handed administrative punishment notices to Pastor Fang Xiaojun and Minister Ma Ben. The church said it believes the government’s actions constitute a violation of the Chinese Constitution, which asserts that all Chinese citizens have religious freedom (Article 36).


A previous hearing regarding Fang’s administrative punishment was held on Sept. 26 but later declared invalid. The church’s prayer letter stated, “Now, we have received the notice that the hearing for Pastor Fang Xiaojun will be held on Nov. 30. Please pray for us, the weaker limbs. May the name of God be glorified again in this matter!”

Dao’en Church has been attacked by the local religious affairs bureau many times this year. Three of its branches have been closed, and the police pressured landlords to stop renting to the church.

ChinaAid exposes abuses, such as those suffered by the attendees of Dao’en Church, in order to stand in solidarity with the persecuted and promote religious freedom, human rights, and rule of law.