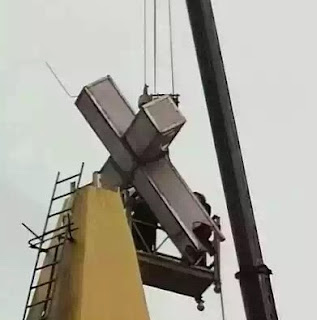 Jiangxi officials crack down on Christianity

(Shangrao, Jiangxi—April 15, 2019) Since September, authorities in an area of China’s eastern Jiangxi province have carried out a sweeping crackdown on Christianity, destroying the crosses of 25 churches and imposing various measures in order to keep a tight rein on religious activities.

On Sept. 30, Poyang County in Shangrao, Jiangxi, organized a flag raising ceremony at religious venues, with all personnel from the United Front Work Department and the local ethnic and religious affairs bureau, as well as leaders from the government-run branches of Buddhism, Daoism, Protestantism, Catholicism, etc., were present. Now, all churches must display China’s national flag, and authorities have installed surveillance cameras and systems within church buildings and posted various propaganda materials on the walls.

People who receive government financial aid have also been forbidden from believing in Christianity. Otherwise, their state-supplied income will be terminated.

In addition, the local ethnic and religious bureau banned Christians from worshipping at church if they take children and removed the crosses of 25 churches.

Moreover, village cadres have occupied six churches, which were forcibly sold to the Communist Party. If the churches would not have been sold, the government would have blown them up.

Poyang County authorities also held a training session about the cultivation of religious policy legislation, which more than 1,000 people attended. During the session, the Secretary of the County Committee, Zhang Zhenxiang, was present and spoke, stressing the difficulty of implementing projects regarding governing religions and the tremendous responsibility and profound significance the Communist Party places on it.