John Bunyan: The English Pioneer of the House Church

On the afternoon of Sept. 24, 2011, after a television interview in London with the BBC, I drove two hours to Birmingham, England’s second-largest city, to preach at the evening service of a large church. This church is 271 years old and the current senior pastor is a black man. That night, I was hosted by a family in the city of Bedford. To my surprise, I learned that this city was the home of the famous author of The Pilgrim’s Progress, John Bunyan.
(Statue of John Bunyan in Bedford, England. ChinaAid photo.)
This city is about 50 miles northwest of London and has a population of about 100,000. In the 17th century, Bunyan was a pastor at the Church of England’s St. John’s Church. Because he broke the Anglican rule forbidding preaching outside the church and preached on the streets of Bedford to crowds of people from different social classes, he was accused of illegally establishing private meeting sites and illegal preaching and was persecuted by the Anglican Church. Finally, in 1660, he was sentenced to a 12-year jail term. It was not until the 19th century that he was “rehabilitated.”
I stood before the statue of Bunyan in the city center of Bedford, staring at this “independent preacher” who for the sake of freedom to preach the Gospel spent 12 years behind bars and endured persecution by the royal church. With his hands on the Bible and his eyes gazing at the crowd, as if proclaiming, “The Bible is my only authority. No other authority can stop me from preaching the Gospel freely to any one in any place.” 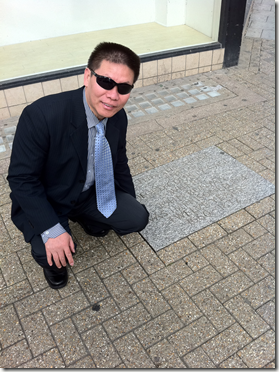 My host in Bedford took me to a spot in front of a store not far away and showed me a rectangular plaque: this was the site of the jail where Bunyan served his 12-year sentence. I looked closely at the plaque on which were carved the words – rendered indistinct by the passage of time, “On this site stood the Bedford County Gaol where John Bunyan was imprisoned for twelve years 1660-1672.”
(Bob Fu kneeling next to the plaque at the site of the jail where John Bunyan was imprisoned. ChinaAid photo)

We then walked to the famous John Bunyan church. In John Bunyan’s time, he held meetings in the homes of different believers, not in the government-run church. Later, they met in what was at the time a bar, now the world-renowned John Bunyan Meeting House (the more recent name is the Bunyan Meeting Free Church). The church is actually what we today call an evangelical church. Disappointingly, because it was a Sunday, the Bunyan Museum next door was closed. I’ll have to come back another time. 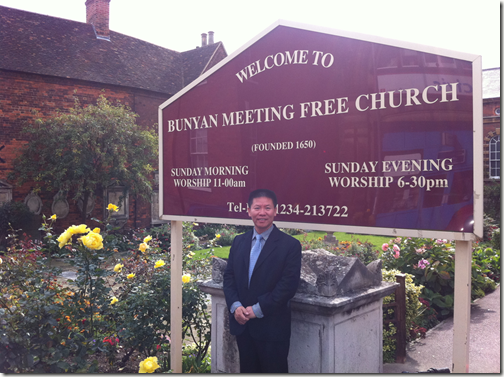 (Bob Fu at the John Bunyan Meeting House, now called the Bunyan Meeting Free Church. ChinaAid photo)
As the Bible says, “There is nothing new under the sun.” So true. Nearly 500 years ago, Martin Luther was called by the Holy See to stand before the judgment seat at the Diet of Worms because of issues of freedom of religion. For the same reason, more than 300 years ago, John Bunyan was framed and sentenced by the Protestant Anglican Church to 12 years in jail. Three-hundred-fifty years have passed, and in the past 60 years in China, we’ve had Wang Mingdao, Watchman Nee and those who are in prison today – Alimujiang in Xinjiang and Pastor Shi Enhao in Henan. China’s house churches have reason to be proud. Because this is the road of that poor independent preacher from Nazareth, Jesus, who was given a most unjust trial by the Jewish religious leaders allied with the rulers and crucified. It is also the road that His disciples after him all walked – a seemingly dead-end road that actually leads to resurrection and everlasting life.
But there’s one thing that should give all persecutors pause and strike fear in their hearts: the church will never die; rather, it will grow ever stronger. “Because this is the right way.”