John Cao, a pastor currently serving seven years in prison in China, encourages others with poem he wrote about reading two Bibles

John 3:16 in Chinese on left… John 3:16 in English on Right…
(Illustration: ChinaAid)
(ChinaAid Association—Nov. 22, 2020) John Cao, a U.S. permanent resident currently serving a seven-year sentence in Kunming (China) because of his faith, wrote the following poem:

Holding the Chinese Bible on the left
and the English Bible on the right,
Reading each Bible, word by word,
Focusing on one translation
and then the other.
Feasting on words
that “taste” sweet like honey,
brightening my eyes
and stirring up
the Refiner’s fire in my bones.
Filling me
with Heavenly treasures
that far exceed
this world’s wealth,
that out-measure
any amount of silver or gold.
~ John Cao 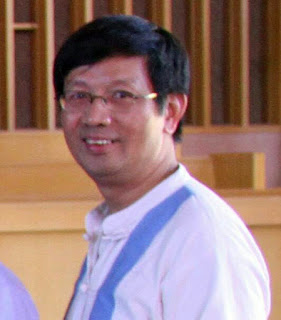 Prior to his imprisonment, Pastor Cao dedicated his life to serving the poor and providing desperately needed supplies in China and Myanmar. Pastor Cao served as a missionary in Myanmar’s Wa [an autonomous region within Myanmar (Burma)] State. There, as he served the poor and provided necessary supplies, God used him to transform the lives of more than 2,000 impoverished minority children. As he worked to fight poverty in the region, Pastor Cao built 16 schools.

Chinese Communist Party (CCP) officials knew Pastor Cao repeatedly crossed the border between China and Myanmar because of his work. Nevertheless, CCP authorities allowed him to do so for three years.

On March 5, 2017, although Pastor Cao and his colleague, Jing Ruxia, had not experienced legal trouble in the past, authorities in China’s Yunnan province intercepted them. They placed both men in prison on illegal border crossing charges. Later, officials changed Pastor Cao’s charge to “organizing illegal border crossings.” In March 2018, authorities sentenced him to serve seven years in prison.

At one time, Pastor Cao, married to an American citizen, Jamie Powell, a legal resident in North Carolina, could have escaped from China. When faced with the possibility of obtaining American citizenship, however, Pastor Cao chose not to accept this option. He felt that remaining in China enabled him to better serve the persecuted Chinese church.

Many observing Pastor Cao’s case assert that his imprisonment does not come from the violation of any border law, but rather arose from China’s ongoing campaign to suppress the Chinese church.

On July 25, 2019, following a farce appeal process, a Yunnan court upheld Pastor John Cao’s seven-year sentence. In the court surrounded by heavy police presence, the court handed down the decision. Officials only permitted Pastor Cao’s family’s lawyer, his 83-year-old mother, and his sister to hear the verdict.

In August 2019, CCP authorities transferred Pastor Cao to a prison in Kunming, the capital and largest city of Yunnan Province.

In your prayers for Pastor John Cao, please include Jamie and their two sons, Benjamin and Amos.