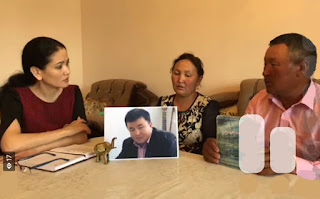 (Almaty, Kazakhstan—March 30, 2019) State security officials arrived at the home of the brother of a human rights activist imprisoned in Kazakhstan and summoned the brother, his sister, and their father to the state security department on Tuesday.

When the brother said his father cannot go since a stroke rendered him unable to walk, the personnel insisted, saying the police have the right to take them away without their consent.

Their incarcerated family member, Serikzhan Bilash, is the founder of the human rights organization AtaJurt, which advocates for the mostly Muslim ethnic minorities living China’s northwestern Xinjiang region and currently being targeted, rounded up, and sent to concentration camps. AtaJurt serves as a platform for such individuals and their families to post their stories, bringing awareness to the situation.

China denied the camps’ existence until they claimed they operated as educational facilities for inmates. However, numerous firsthand accounts describe torture, forced factory work with little to no pay, food deprivation, and the forced learning of Chinese propaganda materials. Those who swear loyalty to the Communist Party are given preferential treatment, and many of the inmates suffer mental health crises because of their internment.

Because of this, China often tries to cover up the realities of the camp, even informally inviting European diplomats on what is likely a propaganda tour of Xinjiang. So far, it is unknown whether or not the Europeans plan to accept the invite.

Bilash was seized in a hotel in Almaty, Kazakhstan, on March 10 when people loyal to the Chinese Communist Party accused him of damaging the relationship between China and Kazakhstan and running an alleged illegal organization. He was taken to Kazakhstan’s capital, Astana, and placed under house arrest at the home of a fellow AtaJurt member. Five days later, two unidentified men who claimed to be medical professionals broke into the place and tried to take Bilash away, despite no one having called for their services, but they were not successful.

Aiman Umarova, Bilash’s lawyer, called on the authorities to stop pressuring Bilash’s relatives in an urgent announcement. She said the summoned family members were compelled to provide evidence so that authorities could use it to indict her client.

In addition, Umarova noted that some social media text messaging platforms attached to Bilash’s name have shown him as active online, despite authorities confiscating his phone.