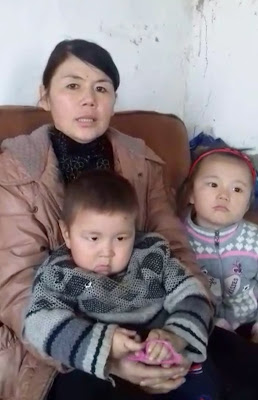 
(Almaty, Kazakhstan—April 20, 2018) Two Kazakh citizens are pleading with Kazakhstan’s government to intervene on behalf of their relatives, who were lured into China’s northwestern Xinjiang and trapped under oppressive conditions.

Ayikamari Rexibek, a China-born Kazakh woman who has obtained Kazakh citizenship, said that her husband, Bakhtiara Krumkibek has been in Chinese custody for 15 months after police summoned him to return to Xinjiang. She said, “The two of us could still talk to each other during the first two or three months, but I can’t contact him now. (My children and I) experienced great hardships after he left. We’ve moved three times this winter.”

She also said that those in her community have been helping them, but the neighbors have their own families to take care of and can’t support them indefinitely.

38 year-old Krumkibek was born in Ili, Xinjiang, and he obtained a Kazakhstan green card a few years ago. Officially, his summons was only for a “conversation” with authorities, but he never returned home. Rexibek is extremely worried about her husband’s safety and well-being, and she suspects that he might be imprisoned in a “political training center,” a network of torturous detention center targeting Uyghurs and Kazakhs living in Xinjiang. Recently, 20 inmates in these centers were hospitalized after suffering mental breakdowns from constant torture.

“I implore the government of Kazakhstan to help my husband escape from China,” Rexibek said.

In the meantime, a nine-year-old Kazakh girl named Huonduzi Alemas posted a video online, requesting that the Kazakh government help her grandparents: “Our family moved to Kazakhstan on Nov. 4, 2016. My grandpa is Suyenbayi Yerzuritan. My grandma is Yeseari Khan. The Chinese government asked them to return to China on Sept. 20, 2017, and took away their passports when they entered China. My grandparents are more than 80 years old, and they can’t support themselves. My parents took care of them. Both of them have Kazakhstan green cards.”

On April 10, personnel from the Ministry of Education in Xinjiang visited Kazakh universities in order to impose “patriotic education” on Kazakh Chinese students, pushing them to live in Kazakhstan and keep their Chinese citizenships. The officials promised that China’s government would provide jobs, but when a handful of students asked the visiting authorities about the political training centers, they replied, “There are no such things.”

However, ChinaAid has obtained multiple verified reports of people being imprisoned in such locations, many of which can be found here.

ChinaAid exposes abuses, such as those experienced by the citizens of Xinjiang and their families, in order to stand in solidarity with the persecuted and promote religious freedom, human rights, and rule of law.