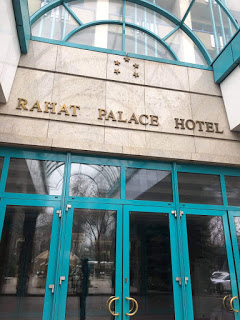 Bilash was set to finish his sentence on July 10, but a court in Nur-Sultan decided to extend the house arrest after a July 8 hearing.

Police and security officials arrested Bilash at an Almaty hotel on March 10. The headquarters for Atajurt, which focuses on the plight of Muslim minorities detailed in concentration camps in Xinjiang, was raided by authorities in March and closed until April 2.

According to supporters of Bilash, Lawyer Aiman Umarova was not able to attend the July trial because the notification came too late for her to travel to the hearing.

Court officials say the house arrest extension came because more time was needed to consider Bilash’s defense and for authorities to examine a book found at his home.

Large amounts of supporters visited the trial to show support for the human rights defender. Some mentioned how Bilash’s teaching helped their relatives and families secure release from concentration camps in Xinjiang.

They noted how Bilash encouraged people to complain about imprisonment and provide information to global media outlets to force Chinese Communist officials to release people.

Supporters of Bilash carried out a signature campaign in mid-June to nominate him for the Nobel Peace Prize. More than 1,000 signatures were collected, according to supporters, who demanded authorities release Bilash from custody.

Those in attendance also protested against the suppression of Kazakhs in Xinjiang by Chinese authorities and expressed concern about the nation’s growing influence inside of Kazakhstan.

A second signature campaign scheduled in Almaty was halted due to obstruction by local authorities. Allies of Bilash remain determined to carry out campaigns in other parts of the country.


ChinaAid has learned supporters of Bilash rallied in front of the presidential palace on July 12. Those in attendance shouted slogans and warned a nationwide demonstration would occur if Bilash was not released on August 10, reports say.

Some allege the sentence of Bilash has been extended due to Chinese pressure. Protesters on July 12 also criticized the government over its obedience to the Chinese Communist Party, according to reports.