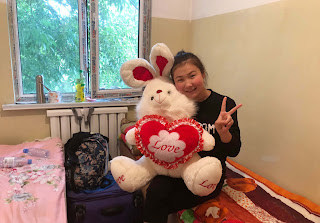 (Almaty, Kazakhstan—July 12, 2018) A Kazakh volunteer organization called Atajurt has been quietly providing assistance to Chinese students who fear imprisonment if they return to China.

Since winter break, the Xinjiang police have detained 89 students from Xinjiang who attend universities in Kazakhstan. The police took away their passports and sent them to “political training centers.” In response, Atajurt rented a two-story building and provided room and board to the international students for the sake of their safety.

Ailili, one of the leaders of Atajurt, stated, “The parents of the Chinese international students are still in Xinjiang. The Chinese government is persecuting Muslims, so they are afraid of going back to China. They will certainly be sent to ‘political training centers’ if they go back. We have provided dorms for them.”

The dorms are at a quiet residential area in Almaty.

“We have 35 boys and 45 girls, 80 people in total,” an Atajurt representative said. “We are trying to find them free tutors and let them learn English and Russian. We are helping them prepare for the college entrance examination. Some students are already in college. We provide free food and help them find jobs. ”

Jayinar, a college student who lives in the Atajurt dorms, has parents still in China. “I’ve been in Kazakhstan for more than three years. I’m afraid that I won’t be able to leave China anymore if I go back. I haven’t returned home for two years. I’m a sophomore at a college in Almaty. I’m alone here. I can’t pay for a room on my own. Life’s so hard away from my parents.”

A girl from Ili Kazakh Autonomous Region in Xinjiang is facing a similar situation. “I haven’t seen my parents for four years. I contact them through WeChat. I miss my parents very much. My father was arrested and detained at the political training center. I’m afraid that he’s been treated violently.”

80 students from Xinjiang chose to stay in Kazakhstan for similar reasons. The police detained most of their parents. A girl revealed that her father was arrested for sending her and her sister to go to school in Kazakhstan. “I’ve been in Almaty for four years. I returned to China last year. My father had already been detained for 15 days when I went back. They detained my father because he sent me and my sister to Kazakhstan for schooling. Now, my sister and I are both in Kazakhstan. I hope to reunite with my parents here as soon as possible.”

The students from Xinjiang are lonely in Kazakhstan, and the support from Atajurt warms their hearts. A girl from Xinyuan County said that they can only contact their immediate family in Xinjiang and are not permitted to talk extensively with extended family. “We are only allowed to greet each other. Grandparents and siblings delete us on (the Chinese social media platform) WeChat.”

Ailili said that Atajurt is also helping them pay their bills.

Atajurt was established in 2017. The organization has several dozens of members who are all Chinese Kazakh who came from Xinjiang. They are all in different fields and professions, but they united in Kazakhstan to assist their recently arrived countrymen.

ChinaAid exposes the ongoing situation in Xinjiang, where many Kazakhs and other ethnic minorities are being targeted for their race and Muslim religion, in order to take a stand for human rights, religious freedom, and rule of law.