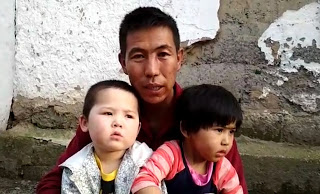 (Ili Kazakh Autonomous Region, Xinjiang—Sept. 19, 2018) Immigrants from China’s northwestern Xinjiang to Kazakhstan penned a petition to the Chinese consulate in? Almaty recently, stating that Kazakhs living across the Kazakh-Chinese border have been arrested and detained in notoriously abusive camps for believing in Islam and having interactions with individuals in Kazakhstan.

They requested that the Chinese government release them.

Among those mentioned in the petition was Nuerjiahefu Awuyelibeike, a 40 year-old imam who had been ordained by the state and operated legally within the country. Because of his faith and a visit to his family in Kazakhstan, he was arrested. Authorities interrogated him and sentenced him to 11 years in prison.

A Kazakh woman, 29 year-old Fatima Biegenuer, was arrested by the Chinese government due to her affiliation with her husband, who is an imam, and a trip to see her family in Kazakhstan. She received a seven-year sentence.

Others detained in “re-education camps” include Yesihati Biegenuer, who immigrated with his parents to Kazakhstan in 2014 and obtained Kazakh citizenship. Because of work, he went to China but was forced to return to Kazakhstan when his employers would not pay him. In August 2017, he tried to go back to China to receive his pay, but his passport and green card were confiscated by the Chinese government upon arrival. He has been detained in a “re-education camp” since March, and no information about him has been available since.

Another Kazakh Chinese immigrant to Kazakhstan, Yeersenguli Silaxi, had her passport confiscated by the local public security bureau in Ili Kazakh Autonomous Prefecture, Xinjiang, on April 16, a day after arriving in China to mourn her recently deceased sister. She is not allowed to return to her three children, whom family members say miss her very much.

“Re-education camps” have spread rapidly throughout Xinjiang in the past few years as authorities, paranoid that the region’s mostly Muslim ethnic minorities have terrorist connections, routinely round up Uyghurs and Kazakhs, press them with false charges, and subject them to torture, starvation, and forced study of Chinese propaganda materials. Many inside the camps have reported other inmates suffering mental breakdowns. Recently, the United Nations estimated that China has imprisoned 1 million Uyghurs.

ChinaAid exposes abuses, such as those suffered by Kazakhs and Uyghurs in Xinjiang, in order to stand in solidarity with the persecuted and promote religious freedom, human rights, and rule of law.