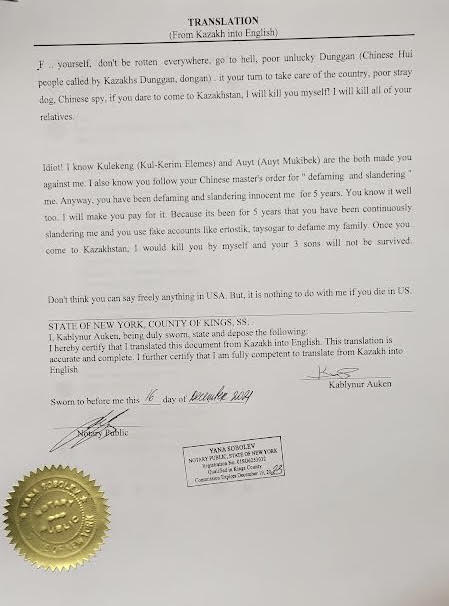 This decision followed a 12-page
police report sent to the city court of Almaty accusing Serikzhan Bilash of
absconding his probation. Authorities claimed he left Kazakhstan illegally to
escape further punishment, but Serikzhan left his homeland through legal
avenues after his parole.

Serikzhan Bilash and his organization Atajurt advocate
for Kazakhs and other ethnic minorities suffering in Xinjiang concentration
camps. His work made him an enemy to China and Kazakhstan, as evidenced by a
recent development from Radio
Free Asia. Duken Masimkhanuli, the president of
the Institute of Chinese Students in Kazakhstan, privately messaged Serikzhan
and threatened to kill him and his three children.

Kazakhstan already charged Serikzhan with terrorism in
2019 and filed two more cases in 2020 against Atajurt’s YouTube channel. Officials claimed the channel contained illegal materials in a desperate attempt to seize and delete video testimonies of
concentration camps. They also registered two false “Atajurts” in Kazakhstan that are pro-China; one called “Atajurt Youth” and the other “Atajurt Volunteers.” Both of these organizations once publically lied, stating that the “political learning centers” (concentration camps) dissolved in Xinjiang.

Serikzhan told ChinaAid why he thinks the Kazakhstan
government rescinded his most wanted status:

Fearing Western
sanctions, the Kazakh authorities are appealing to the West through these
shameful performances. This is the first goal. The second goal is to eliminate
the fact that I was sentenced to seven years in prison and to hide the fact
that I was sentenced as a “terrorist.” They are trying to hide the
fact that my accounts have been frozen, all my property has been confiscated,
and my real estate and movable property have been frozen.