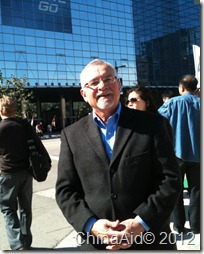 (Los Angeles—Feb. 17, 2012) A pastor in Los Angeles calling for the release of six Chinese prisoners of conscience outside the L.A. hotel of visiting Chinese vice president Xi Jinping was arrested Friday morning and taken away in handcuffs.

(Photo shows Pastor Romero just before his protest and arrest.)

Go here to see a photo gallery of his protest and arrest:http://lang.sgvtribune.com/photos/photos.asp?a=1417401

Romero, who is also director of ChinaAid’s Los Angeles office, said in an e-mail Thursday urging others to join him, “As a pastor, I must raise my voice to injustice; as a professor of Philosophy, I know the ethical thing to do; and as the Director of China Aid Los Angeles I would be negligent of my duties to let this moment pass in silence.”

Quoting from Micah 6.8 in the Bible, Romero said that he wanted the action to “remind China’s Vice President Xi, US Vice President Biden, Governor Brown and Mayor Villaraigosa that we are…‘To act justly and to love mercy and to walk humbly with (our) God.’”

He also prepared a formal statement, which is below.

Romero, pastor of the Hacienda Christian Fellowship, in 2008 had traveled to Beijing during the Olympic Games where he staged dramatic protests in Beijing hotel rooms highlighting China’s human rights record.

“I, along with others, have taken a step today as an act of kinship with heroes and heroines of faith and conscience now languishing in Chinese prisons.

Many politicians and diplomats want to draw a clear distinction between the economy and human rights, for fear of offending their Chinese counterparts. My hope is that Vice President Joseph Biden, Governor Jerry Brown and Mayor Antonio Villaraigosa will rise above any pandering spirit but [act] as true statesmen, intentionally blur the artificial line between the economy and human rights.

In the 2008 Beijing Olympic Games, I had the privilege of raising my voice for the persecuted on Tiananmen Square, the very place where the fight for democracy and freedom reached an apex and then suffered a brutal and bloody fall in 1989. My message then and now remains the same “God says, let my people go so they may worship me” (Exodus 8.1). Good women and men of faith and conscience have suffered too long under the unjust hand of the Chinese government, and more specifically the Chinese Communist Party.

I, and countless others, have great hope for progress in US-China relations as Vice President Xi Jinping assumes leadership in China. The sixteen-year persecution of his father for acts of conscience not dissimilar from those of the China Six—a persecution which Vice President Xi acutely shared—offer hope that he will understand the importance of rule of law reform as a means of protecting and enhancing his county’s security, success and respect.

The treatment of the China Six will send a clear signal about Vice President Xi’s vision for China’s future and his interest in improved relations with the United States.