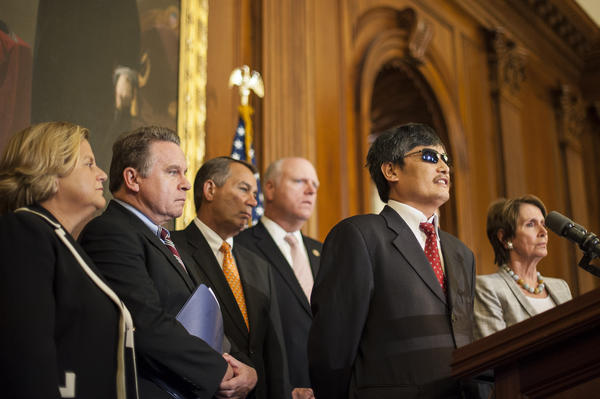 WASHINGTON – Blind Chinese dissident Chen Guangcheng, whose harrowing escape from house arrest and surprise arrival in the United States captivated Americans this spring, visited congressional leaders in the Capitol to press the Obama administration to support human rights in China.

Led into a meeting room off the House floor on the arm of Speaker John A. Boehner (R-Ohio), the activist spoke Wednesday of the aspirations of ordinary Chinese who are pushing for greater freedoms, and recounted his nephew’s brush with Chinese authorities in a case that he said needs answers.

“Despite this challenging environment, the Chinese people have increasingly developed a greater consciousness about their rights and overcome their fears in asserting their rights,” Chen said, speaking through an interpreter.

“As more and more Chinese people are not afraid to stand up and assert their rights, change in China is inevitable,” he said. “At this critical point of transition in Chinese society, I sincerely hope the United States and all other nations that embrace the fundamental values of constitutionalism, democracy, freedom and the rule of law will support and assist with the smooth transition in China.”

Chen has specifically fought against his country’s one-child policy – an issue important to Boehner, who has deeply held views against abortion.

“While our economic relationship with China is important, the United States has an obligation to engage China and press for democratic reforms and improvement in its human rights practices,” Boehner said. “We cannot remain silent when fundamental human rights are being violated. We cannot remain silent when religious liberty is under attack. We cannot remain silent regarding China’s reprehensible one-child policy.”
Democratic Rep. Nancy Pelosi of San Francisco, the minority leader,  noted the “courage” and “bravery” of Chen’s work as she agreed with the Republican leader.
“I don’t often say this, Mr. Speaker, but I do wish to associate myself with your remarks, because I think you said very well all that our country stands for in our relationships with other countries and our relationship with Chen’s case.”

Other lawmakers, including those from New York who have supported Chen, were also on hand.

After fleeing house arrest in the dark of night and making his way to the U.S. Embassy in Bejing this spring, Chen left the country in May to study law at New York University in Manhattan.