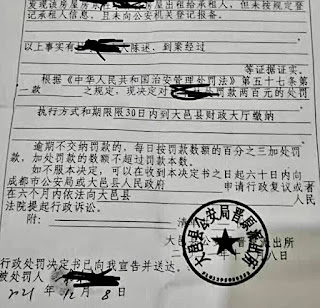 The notice also said that it found that the premises were
rented out, but the tenant’s information was not registered according to the law.
Also, Police Department claimed they were uninformed of the lease. Per the Law
of the People’s Republic of China on Penalties for Administration of Public
Security Article 57 Clause 1, the landlord should be fined 200 yuan. Property owners
should pay the fine at Dayi County Finance Hall within 30 days. If it is
overdue, the fine increases 3% of the total each day, and the increased amount
should not exceed the fine itself. If the person disagrees with the decision,
the person should send an appeal application to Chengdu Municipal Police Bureau
or Dayi County People’s Government within 60 days, starting the day of
receiving the notice. Alternatively, the person can file a lawsuit to Dayi
County Court within 60 days.

After their fine involving the landlord, Shen Bing
sighed:

“The anniversary of the 129 crackdown reminds that we
are Christians and sojourners and should use the gospel to defend the truth any
moment! The gospel is multi-functional.”

December 9 marked the third anniversary of the massive
Early Rain crackdown in 2019. Police arrested Li Xiaofeng, the librarian of
Early Rain Covenant Church non-profit library. Authorities charged her with “illegal business operation” and
released her on bail on June 11, 2019. Shen Bing and Li Xiaofeng left Chengdu
upon police’s request, and they moved south. Recently, the couple moved
back to Chengdu, and police expelled them from their residence.

Shen and Li are members of Tashui, an Early Rain small
group, which faced harsh persecution this year. National security officers placed
Dai Zhichao, the leader, and his family under surveillance. He suffered

detention, beatings, and arrests. Other members of the group have similar
stories.

In November, Shen Bing and Li Xiaofeng were not allowed to leave while
visiting Dai and his family who were illegally detained at home. Later that evening,
Deacon Xu Jiale of Early Rain Covenant Church and his wife—Qin Ningping— hosted
Shen Bing and Li Xiaofeng in their home
until they received their resident permits. Officers of Chengdu Qingyang
District stayed at Deacon Xu’s home without consent. Additionally, they
installed a camera at the entrance of the condo and put them under 24-hour
surveillance each day. Police stayed for over a week and did not leave end Li
and Shen left.