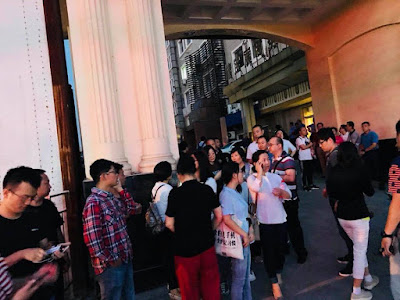 Update: Zion Church’s pastor, Jin Mingri, was taken into custody, along with other pastors, when they arrived at the church to collect their belongings. He has since been released.


(Beijing—Sept. 10, 2018) When one of Beijing’s largest underground churches first refused to install surveillance cameras that would allow authorities to spy on their activities, they didn’t know it would end Sunday with officials storming into their church building and legally shutting it down.

Personnel from the Chaoyang District Civil Affairs Bureau informed Zion Church yesterday that it violated regulations by holding religious activities without registering with the government, a prerequisite China sets forth in order to exercise increased supervision over the ideologies being taught. In addition, they confiscated the church’s “illegal promotional material.”

“‘I fear there is no way for us to resolve this issue with the authorities,’” Reuters quoted the church’s pastor, Jin Mingri, as saying.

The church has decided it will not be swayed by the ban and instead hold services outdoors.

ChinaAid Founder and President Dr. Bob Fu believes the legal chokehold Beijing has placed Zion Church in is part of a larger crackdown on Christianity across China, saying: “The massive clampdown against thousands of churches in Henan and the forced closure and total shutdown of the largest house church in Beijing, Zion Church, represents a significant escalation on President Xi’s crackdown down against religious freedom in China. Now that the Chinese Communist Party has started to burn Bibles and coerce millions of believers in the Christian faith and other religious minorities to even sign a written pledge to renounce their basic religious beliefs, the international community should be alarmed and outraged at this blatant violation of freedom of religion and belief and demand the Chinese regime stop and remedy this dangerous course.”

Alarmed by these developments, ChinaAid calls on the international community to intervene on behalf of Chinese Christians and join us in exposing China’s abuses in order to uphold human rights, religious freedom, and rule of law.