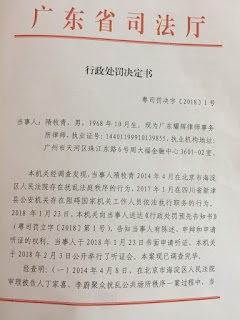 Referencing a hearing that occurred on April 8, 2014, the justice department accused Sui of disrupting court order while he defended Ding Jiaxi, stating that Sui “did not obey the directions of the court or abide by court etiquette, used uncivilized, offensive language more than 10 times, interrupted and intercepted the others’ speeches more than 110 times, and beat the table two times. He also did not comply with the court appearance time and did not appear on time; walked around the court a total of 10 times without the court’s permission; persisted in leaving the court and refusing to defend without appropriate reason. Although repeatedly reminded and warned by the court and formally admonished twice, he still disrupted the court. The Haidian District People’s Court in Beijing, in accordance with the stipulations of the Criminal procedure Law of the People’s Republic of China and the Supreme People’s Court on Applying Criminal Procedure Law of the People’s Republic of China, issued a penalty decree (Haidian Criminal Series No. 2974) … On April 11, 2014, the party signed the ‘penalty decision’ and paid the fine. There is no evidence on the ‘penalty decision’ that the party applied to a higher level of the People’s Court for administrative reconsideration within the time limit specified by the court.”

In another instance that occurred on Jan. 13, 2017, the department claimed Sui ignored prison regulations and attempted to take a photo with Chen Yunfei, who he was visiting in jail. The police asked him to delete the photos.

The document also indicated that Sui had impeded authorities’ ability to complete their jobs.

As such, the officials ruled that Sui must hand in his lawyer’s license within 15 days of receiving the notice. If he wished to combat the decision, the notice said that he could apply for administrative reconsideration to the Ministry of Justice within 60 days or submit an administrative motion to a Guangzhou Railway Transportation court within six months.

However, China often wrongly accuses lawyers in order to prosecute them for defending victims of the government’s human rights abuses.

ChinaAid exposes abuses, such as those suffered by Sui Muqing, in order to stand in solidarity with persecuted Christians and promote religious freedom, human rights, and rule of law.