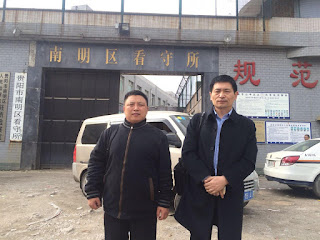 (Guiyang, Guizhou—March 21, 2016) The lawyers of an arrested house church pastor in China’s southern Guizhou province were denied a meeting with their client on March 8 despite following the procedures to obtain government approval.

Chen Jiangang and Zhao Yonglin, two lawyers hired by the wife of Yang Hua, a pastor of Huoshi Church currently serving jail time for “divulging state secrets,” went to the Nanming District Detention Center on March 7 in order to request a meeting with their client. When they arrived, the authorities informed them that they must fill out an application and wait for government approval. On March 8, officials denied their request.

In an interview on March 9, Chen spoke about how the government’s failure to uphold the rule of law infringes on the duties of lawyers, saying they no longer have the capability to predict what will happen in court due to the officials’ arbitrary actions.

“[The officials] do not need to comply with the law. They just need [to act] in accordance with the will of the ruler. … Moreover, violating the law does not have any cost [for them],” he said.

Initially, Yang was sentenced to two consecutive, five-day administrative detention periods in December for “the crime of obstructing justice” and “gathering a crowd to disturb social order.” When his wife came to collect him on Dec. 20, however, she learned that his charge had been changed to “illegally holding state secrets” and that he had been transferred to criminal detention. His charge changed to “divulging state secrets” when he was formally arrested on Jan. 22.