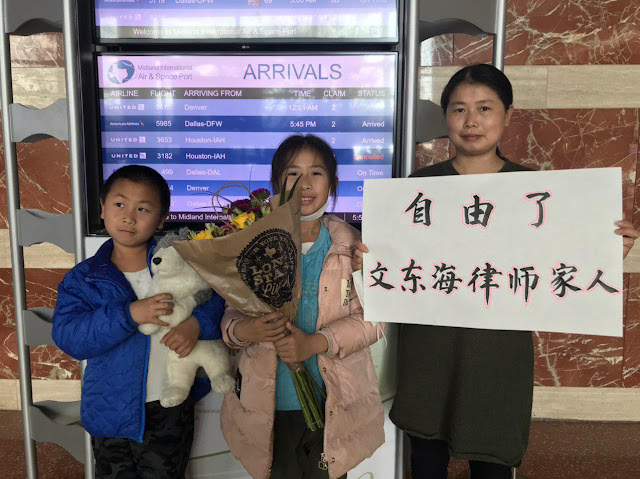 (Shanghai—March 17, 2020) Note: The following is a piece written Zhou Youfang, the wife of human rights lawyer Wen Donghai. In it, Zhou is describing the harrowing trip her family took to freedom.

Zhou and her family have since successfully made it to Texas.

I am Wen Donghai’s wife.

At around 10 p.m. on Dec. 29, 2019, we were getting ready for bed when Wen Donghai suddenly got phone calls and messages warning him that there would be an imminent crackdown and that he should flee from his residence right away. Wen’s first reaction was that he had not done anything, and it should be fine. After hesitating for a while, he decided to rest. His worried friends, on the other hand, urged him to take action. Considering the precarious political environment in China, Wen eventually accepted their suggestions and prepared to live elsewhere for the night. I was disoriented. A premonition of imminent changes hit me. Although teeming with fears for the future, I calmed myself down and packed a few things for him. When he disappeared into the night, I could not restrain myself anymore and began to cry.

That night passed slowly. I tried to recall the things we had been through in the past years. Wen Donghai is a serious, sober man. He has always been devoted to his work. He rarely talked about his work, but I could discern that he was not as relaxed after the 709 Crackdown in 2015. The local police developed a peculiar interest in our household. I attempted to prevent him from being involved in dangerous situations, but I could not bring myself to persuade him once I realized how firm and uncompromising he was. He began to take on more and more cases concerning human rights until his license was suspended in June 2018. He was a member of the Chinese Communist Party (CCP). After his license got suspended, he announced publicly that he would no longer be part of the Party. Shortly after, he was officially expelled from the CCP.

Fortunately, Wen Donghai opened a legal service company. We were not as well-off compared to a few years ago, but we didn’t need much either, not to mention that the friends and acquaintances he made in these years provided generous help. Wen Donghai still got indignant when his lawyer friends and normal citizens were persecuted, but he did not get involved as much for the sake of our two young children. I thought that we would live a relatively quiet life. We would survive like a rowboat, pulling through the occasional bumps and jolts with no trouble as long as there is no storm.

Disturbed with thoughts and memories, I could not sleep. The next morning, I got a call from Wen, who said that he wanted to talk with me about something important. I was anxious as well as relieved because at least I knew he was still safe. We arranged a time and place to meet. The first thing he said to me was, “Some people complicated this. It won’t end easily.” Lawyer Huang Yongqiang from Hangzhou was a business lawyer who did things moderately, but he was detained after only attending one gathering. Wen believed that he was also in danger. The government might take vengeance, and the police did not need a legitimate reason to arrest people, so he had to send us away today.

Sending us away? To where? I told him that I didn’t want to go, but he insisted that life would not be better off if I chose to stay. His friends overseas will help out, whereas the friends in China have their hands tied under strict government control. I complied after a painful struggle. In the evening, a car drove us to an airport in Shanghai. Maybe God was with us. We didn’t run into any troubles. After a night’s travel, we arrived in Japan. Many friends there supported us graciously. The only thing I could do was to remember their deeds. Maybe one day I will tell their stories.

On our flight, Wen Donghai was worried that the police would ambush us at the airport, so he got off the car in Hangzhou. Before he left, he woke up our children, who were sleeping soundly in the backseat. He said: “Dad’s got a few things to do here.” He promised that he would be joining us after he finished, and he asked them to listen to me. He then embraced me and whispered, “Now, you’ll take care of our children.” I hugged him, and I wished that we would never have to separate. He let go and walked away.

After arrived in Japan, I tried all the means to inquire about the news in China. Shortly after we left home, police (including police in plainclothes) waited for us in our neighborhood. The next day, Wen Donghai’s niece was on her way to visit her grandma, and the police mistook her for me, followed her into our house, and questioned my mother-in-law and my niece about Wen Donghai’ whereabouts. Failing to locate Wen in our house, they assigned four police officers in the afternoon and interrogated Wen’s assistant at the company. The police then found the friends who arranged our trip to the airport and forced one of them to confess the location where we got in the car. They obtained access to the surveillance video and recognized the driver who sent me to the airport.

I am afraid. I don’t know what would have happened if we were a step late. After separating in Hangzhou, I have not been able to contact Wen Donghai. He contacts me occasionally when he can. I don’t know if he’s doing well. All I can do is pray that he will be safe. Now I’m with our two children in Japan, still deciding what to do next.