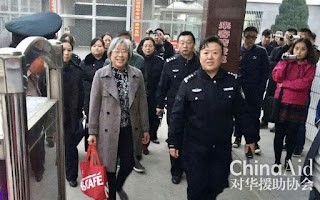 Linfen Golden Lampstand Church is a large house church
with 50,000 members. Members donated ¥17 million (2,673,502 USD) to build their
church building. However, the local government forcibly demolished it on January 9,
2018.

In the past, Pastor Wang and Preacher Yang worked for Shaanxi
Normal University. They resigned from their jobs in 1998 and started serving
the Church full-time. Preacher Yang, a fifth-generation Christian, became a believer
at a young age. Pastor Wang, who authored more than 10 biblical books, presented an in-depth analysis of China’s house churches. Their church grew from less than
100 members to more than 50,000.

During this time of growth, the Church held to the authentic Christian faith. They refused to join the Communist-sanctioned Three-Self
Church or register with the Religious Affairs Bureau. Consequently, CCP
authorities constantly persecuted and suppressed members. Since 2004, local
government officials have frequently cut off their water and power. In 2009,
the renowned September 13 crackdown occurred.

At approximately 3 am on September 13, 2009, Fushan
County CCP authorities ordered more than 400 police to raid Golden Lampstand
Church and its evangelical shoe factory. Police officers brutally beat
Christians who had been sleeping in their apartments, injuring more than 100
people to the point some lost consciousness and required emergency medical
care. Authorities contracted bulldozers and excavators to destroy buildings,
appliances, cooking wares, and other Church possessions.

The Brothers
and Sisters of our Church paid more than ¥10 million to build the Church. I did
not pay any money. You need to ask them. If they agree to sell the Church, you
give the money to them. If they disagree, I cannot do anything. I do not have
the authority to make that decision for them.

In 2021, five years after CCP authorities released
Preacher Yang, she was arrested again. This time, she was charged with “fraud”.
The “fraud” charge is frequently used by CCP to persecute Christians.