Letter to Secretary Clinton from Reps. McGovern and Wolf, regarding diplomatic response to the crisis in Tibet

China Aid Association
(Washington D. C. – August 11, 2012)  Prominent Reps. McGovern and Wolf wrote a letter to Secretary Clinton, urging the U.S. to take leadership to advance a stronger, more coordinated and visible international diplomatic response to the crisis in Tibet, including the establishment of a contact group and/or holding an international conference on Tibet, Wednesday, August 9th. 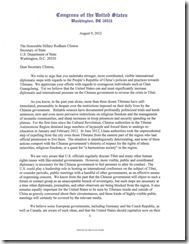 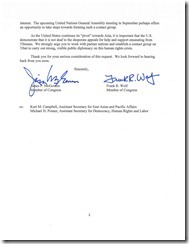 We write to urge that you undertake stronger, more coordinated, visible international
diplomatic steps with regards to the People’s Republic of China’s policies and practices towards Tibetans. We appreciate your efforts with regards to courageous individuals such as Chen Guangcheng. Yet we believe that the United States can and must significantly increase diplomatic and international pressure on the Chinese government to reverse the crisis in Tibet.

As you know, in the past year alone, more than three dozen Tibetans have selfimmolated, presumably in despair over the restrictions imposed on their daily lives by the Chinese government. Reliable sources have documented profoundly politicized trials and harsh sentences, new and even more pervasive restrictions on religious freedom and the management of monastic communities, and sharp increases in troop presences and security spending on the plateau. For the first time since the Cultural Revolution, Chinese authorities in the Tibetan Autonomous Region detained large numbers of laypeople and forced them to undergo reeducation in January and February 2012. In June 2012, Lhasa authorities took the unprecedented step of expelling from the city even those Tibetans from the eastern part of the region who had official permission to live there. The situation is unambiguously deteriorating, and none of these actions comport with the Chinese government’s rhetoric of respect for the rights of ethnic
minorities, religious freedom, or a quest for “a harmonious society” in the region.

We are very aware that U.S. officials regularly discuss Tibet and many other human
rights issues with like-minded governments. However, more visible, public and coordinated diplomacy is necessary for the Chinese government to feel pressure to alter its conduct. The U.S. could playa leadership role in hosting an international conference on the subject of Tibet, or consider periodic, public meetings with a handful of other governments, as an effective means of expressing concern. We know from the past that the Chinese government will object to such a forum or contact group as an unacceptable breach of sovereignty, but such steps are necessary at a time when diplomats, journalists, and other observers are being blocked from the region. It also
remains equally important for the United States to be seen by Tibetans inside and outside of China as gravely concerned about their circumstances, and these kinds of highly-visible public meetings will certainly be covered by the relevant media.

We believe some European governments, including Germany and the Czech Republic, as well as Canada, are aware of such ideas, and that the United States should capitalize now on their interest. The upcoming United Nations General Assembly meeting in September perhaps offers an opportunity to take steps towards forming such a contact group.

As the United States continues its “pivot” towards Asia, it is important that the U.S.
demonstrate that it is not deaf to the desperate appeals for help and support emanating from Tibetans. We strongly urge you to work with partner nations and establish a contact group on Tibet to carry out strong, visible public diplomacy on this human rights crisis.

Thank you for your serious consideration of this request. We look forward to hearing
back from you soon.