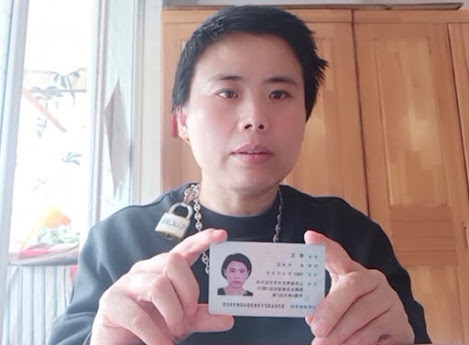 (Zaozhuang, Shandong province—April 1, 2022) Recently,
Li Yu, a human rights activist, suffered a severe and constant cough due to
complications from asthma. Local national security officers surveil her and took
Li Yu to small clinics to treat her with shots and medication. Her symptoms did
not improve. Li Yu wanted to go to a hospital, but they rejected her request.
She posted a video, asking for help and calling on people to follow her
situation.

In the video, Li Yu held her ID, saying, “Hello all,
my name is Li Yu. I am an advocate and a single mom. I was imprisoned twice on
a charge of provoking trouble and picking quarrels for six years total. My son
is 8 years old.”

Today, authorities installed
a surveillance camera at my home in my hometown. They also used a rented home to watch me in my house, and they don’t let me leave. If I want to go out,
I should get permission from superiors and apply, and I can’t leave without
their permission.

I met with my son, who I have
not seen for many years, during the Winter Olympics and the National Two
Sessions. The meeting was only 10 minutes. I was forced to give up all my
social apps including my Twitter account because I spoke up for the chained
woman on Twitter. In addition, all my tweets were deleted through different
tech approaches, and I was barred from staying in contact with others. On March
8, I was forced to travel.

After I returned to a
medium-risk area, I was required to quarantine at home for 14 days in Zaozhuang.
I had a COVID test every other day because of my cough, but I didn’t receive
any medical treatment. The stay-home quarantine was over on March 24. I had a constant cough because of complications from asthma, and I was not given money
for medical treatment. I don’t know why my hometown, Zaozhuang, put me in
quarantine again and again. Now, I am not allowed to go anywhere because of the
pandemic. I have been banned from visiting Beijing for 3 months, and they have
not given me an answer to my appeals. I want to live, I want to survive, I
want to live a normal life, I want to see my son, I want my custody back.
Please follow my case.

Li Yu is a human rights activist residing in
Zaozhuang, Shandong. In 2008, she started to protect her rights because her
home and farm were destroyed. Afterward, she was detained twice by Chinese
authorities for attending events commemorating Tiananmen Square Massacre, and her
imprisonment totaled 6 years. She gave birth to a child before the second conviction,
they stripped Li Yu of parent custodial rights. Her child was sent to an
orphanage.

Li Yu, escorted by multiple government personnel, visited
her son for the first time in three years. Her son will turn 9 years old soon. They
allowed Li Yu to see her son for over 10 minutes.

On March 8, 2022, International Women’s Day, Li Yu
wore a mask with the image of the chained lady and a chair on her neck, calling
on the government to investigate the case. She recorded it and uploaded it to
social media.