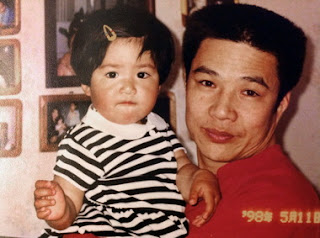 Lisa Peng of Shaker Heights tells her father’s story, seeking his release from a Chinese prison

Lisa Peng, 16, submitted this column to The Plain Dealer in her effort to draw attention to the plight of her father, an activist who was working on behalf of democracy before being captured and imprisoned by Chinese authorities.

This weekend President Obama meets with his Chinese counterpart Xi Jinping. My family always has mixed feelings about such summits, because my father, Peng Ming, remains in jail in China, serving a life sentence for standing up for democracy and human rights. I have respectfully petitioned President Obama to ask for my father’s release. I hope and pray that he will do this not only for my father, but also for the many thousand Chinese prisoners who share a similar plight.

Nine years ago, my father was ripped away from my family when he was kidnapped in Burma by Chinese agents. At the time, my father, my mother, my older brother and I were political refugees in the United States, our newly adopted country. My father was a wanted man in China because he was the founder of the China Development Union (CDU), an organization started to discuss censored topics of democracy, free speech, justice, and human rights. For this he was branded a criminal.

But my father has never been a criminal. He is an environmentalist and an economist who protested at Tiananmen Square 24 years ago and faced down Chinese tanks. He survived the massacre that day, but could not forget those who did not. He vowed to devote his life to securing human rights for his country.

The Chinese government continued to harass him, even in exile. The government closed the CDU in 1998 and sentenced my father to 18 months in a labor camp. I was four when his sentence ended and he took his young family on a harrowing journey of escape through China to Thailand. Eventually we made it to the United States, this great country, which gave us refuge. For my father and our family, America stood as a beacon of freedom and democracy.

But 18 months of labor camp did not stop my father from continuing to stand up for human rights. In 2004, my father went to Thailand to set up a safe haven for persecuted refugees. There, he was lured by eight Chinese secret police to the border of Thailand and Burma, where he was kidnapped at gunpoint. He was brought back to China, dumped in a jail cell, beaten repeatedly by guards, tried and sentenced. His crime: passionately desiring democracy and freedom in China.

I will graduate from Laurel School next year, marking a decade of separation from my father. It has been a decade of childhood memories, emotional growth, and intellectual maturity for me, but a decade of severe heart attacks, chronic kidney stones, medical negligence, and torture for him. My father survives as a man of faith, as a father, and as an activist who has great hope that his fight for justice and freedom will prevail.

It is this hope that my father has instilled in me, despite the thousands of miles and years that divide us. It is this hope that makes me optimistic about reuniting with my father some day. But that day will only come if the United States makes the release of prisoners of conscience in China a larger part of our bilateral relationship.

Over the past year, I have worked with the organization ChinaAid that is helping free my father. Last week, we met in Washington DC with State Department officials and members of the Ohio Congressional delegation. We held a press conference with 30 other Chinese democracy and human rights groups to launch the “Free China 16” campaign, an effort to press for the release of prisoners of conscience, including my own father. We asked President Obama and his administration to make the release of these prisoners a priority in his dealings with China.

I have the privilege of living in a country and in a state that values the fundamental freedoms of speech, religion, and the rule of law. This allows me to be a voice for the voiceless. I want my father to experience the freedoms I have enjoyed. I want these same freedoms for China.

My family and I are watching the U.S.-China summit this weekend, hoping that, behind the smiles and handshakes and promises of better relations, my father and the tens of thousands of other political dissidents will soon be released.