The March 1 document was jointly issued by the Jiaozhou Communist Party United Front Work Department and the Jiaozhou Municipal Bureau for Ethnic and Religious Affairs in advance of the opening of the National People’s Congress on March 5, at which a historic leadership transition that began last fall was finalized. Tightened security measures and heightened vigilance and social tensions that normally accompany the annual legislative session were even more severe this year because of the leadership transition and the political scandals that had preceded it.

The internal document with two registration forms required all party committees and the township level and all neighborhood party work committees to conscientiously carry out a thorough investigation of ” privately established religious meeting sites” throughout the city and to report their findings before March 25. (click on the thumbnails to enlarge; translation is below) 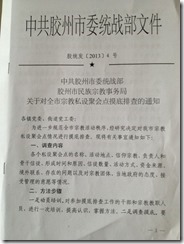 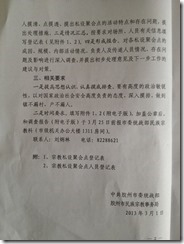 The ” privately established meeting sites ” mentioned in the document refer to “meeting sites” that have not joined the religious entities under the control of the local government, and the information sought was mainly these four types:

The document called for in-depth thorough investigations of every village in every town and every person in every household and required the production of reports that included suggestions for “preliminary steps” for handling the sites and “next-step recommendations and counter-measures.”

ChinaAid’s social media reporter learned through interviews that nearly 100 Christian house church meeting sites in the area had received the government’s registration forms. One house church elder said, the term “privately set up” really means that we are “illegal,” and the officials from the religious affairs bureau want to know whether we have any anti-Three-Self or anti-government tendencies and want to try to incorporate us under their leadership

In 2011, the Chinese government formulated a 10-year plan to eradicate house churches, and this document is without doubt a part of the implementation process of this government decree. The Jiaozhou document has now been transmitted to all the grassroots levels and concentrated thorough investigations were carried out during the national legislative session and the information collected in the registration forms have been submitted to higher government levels.

Although some overseas observers of the Chinese church have expressed doubt about or have a wait-and-see attitude toward the facts reported by ChinaAid, naively believing that the Chinese government would not have such a plan to “eradicate house churches,” this new document and the implementation measures are further evidence that this plan continues to be carried out at the local level. 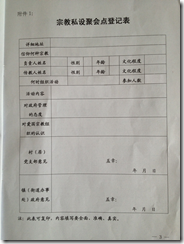 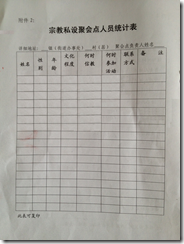 Document of the United Front Work Department of the Jiaozhou Municipal Party Committee of the Communist Party of China
Jiao Tong Fa (2013) No. 4

Notice on a City-Wide Thorough Investigation of Privately Established Religious Meeting Sites
To all township party committees and neighborhood party work committees:
To further standardize the order of religious activities throughout the city, it has been decided after some study to conduct a thorough investigation of the privately established religious meeting sites in our city. The notification of the relevant matters are as follows:

1. Investigation details
Names of the various privately established meeting site, locations of their activities, religion, persons in charge, core believers, when and why the group formed, number of believers, activities patterns, funding sources, overseas contacts, problems, attitudes towards religious organizations and the local government, willingness to accept management and other factors.

2. Methods and procedures
First, mobilize people for training. Conduct a training session for the cadres and religious affairs workers who will participate in this thorough investigation, to raise their level of understanding and master the methods. Second, thoroughly investigate. The people must be thoroughly identified, the sites thoroughly assessed, and the characteristics and existing problems of the privately established meeting sites ascertained. Suggestions for how to handle [the sites] should be made. Third is a summary of the situation. Provide information as required about the venue and the people by filling out the registration forms (see attachments 1 & 2). Four, produce a report. Conduct an in-depth investigation into why the private meeting site was established, its size and the situation of its internal activities, the person in charge and its preachers, as well as its existing problems and influence. Also suggest some preliminary steps for handling the site and next-step recommendations and counter-measures.

3. Related requirements
First, raise ideological understanding and conscientiously conduct a thorough investigation. A high degree of political acumen is necessary to conduct an in-depth investigation with a highly responsible attitude for China’s political and social stability, so that no village is overlooked in a town and no individual is overlooked in a household.
Second, time requirements. Please fill in the forms in attachments 1& 2 (electronic versions are attached). After the official seal is stamped, submit both attachments and the investigation report (attach electronic version) before March 25 to the Religious and Ethnic Affairs Section (Room 1311 of Municipal Office Building) of the Municipal Party Committee’s United Front Work Department.