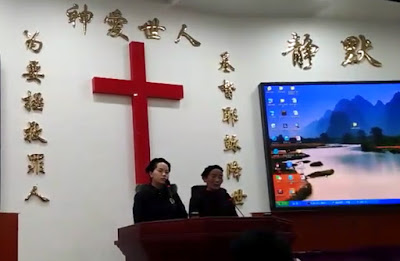 Many districts in Zhejiang initiated a purge against Christians

(Wenzhou, Zhejiang—May 17, 2018) Recently, the local governments of Wenzhou and Shaoxing in the Zhejiang province of Eastern China have begun to scrupulously inspect religious venues and intimidate church members.

According to local Christians, government departments planned to ban all religious meeting places. The government officials often visit a gathering place before issuing the ban, pressuring the landlords who accommodate the churches or criticizing the building’s fire-fighting facilities.

The government conducted the so-called fire safety inspections in the religious venues in order to find excuses to shut down the churches. A Hangzhou Christian named Li spoke on the unfair treatment. She said, “The police often show up and say that they want to conduct a fire safety inspection. They wander around in the church and arbitrarily point out that some facilities do not meet the standards. Then, they require you to reform in two weeks. Even if you do exactly as they said, they would still deem you ‘unqualified’ in the next inspection. You are helpless.”

According to the official website of Shaoxing’s religious affairs bureau, an inspection was done on April 25 of the Zeshuipai Christian Church and Tongqing Temple in order to ensure stability and prevent potential hazards. The government officials, Wang Ziqin and Wang Yongxing, paid special attention to the usage and maintenance of fire safety, electricity safety, gas safety, emergency exits, and the candles in the religious venues. They also questioned the directors of the churches about the safety issues.

Regarding this, Christian Mr. Zhu pointed out that the government was only trying to find an excuse to ban the unofficial churches. He said, “The government will ban you no matter what. We no longer organize large-scale gatherings. Only a few people meet up in their own houses, changing location once in a while.”

Meanwhile, many parents whose children were attending middle and elementary schools in Wenzhou, Zhejiang received messages from head teachers during the week demanding them to report their religious beliefs.

An anonymous Christian said, “Many schools in Wenzhou are investigating the religious backgrounds of students. Firstly, they find out if the parents are Catholics or Christians. Then, they find out the names, home addresses and addresses of their workplaces. Finally, they will show up in your house and ask you to renounce your religious belief.”

The government also forces the Christians to renounce their religious beliefs by pressuring their superiors at their workplaces. Another Christian added, “They cancel your bonus and wage subsidies and threaten you. They use all kinds of methods in order to prevent you from going to the church.”

Likewise, last month, the government of Huludao, Liaoning province initiated an operation to suppress churches, titled, “Purging the Cultural and Religious Environment in the City, Fighting Against the Harmful Foreign Infiltration.” According to the official website of Huludao’s religious affairs bureau, the government inspected four major Christian venues on March 18 in order to ensure the stability of the local cultural market and prevent “harmful foreign infiltration.” The government also inspected the bookstores and printing businesses that sell religious materials, investigating the supply channels of the books.

According to government reports, the officials inspected 64 printing stores, 15 printing factories, 14 bookstores, three newsstands, and four churches. Some of the aforementioned venues sold the Bible and other religious materials with set prices, but they did not have government permission. The law enforcement officers asked the owners to get permission at the department of licensing or immediately stop selling the religious materials.

ChinaAid seeks to expose the abuses and oppression of the Chinese government’s towards religious groups in order to promote religious freedom, human rights, and rule of law.