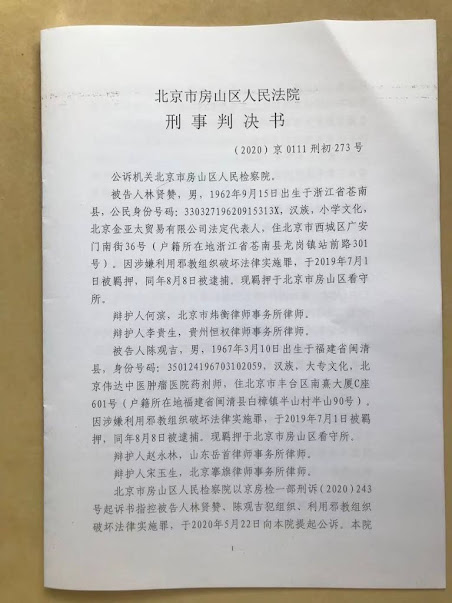 As Beijing Chinese Communist Party (CCP) authorities have intensified control and cracked down on religions since Xi Jinping assumed power in 2012, they have ruthlessly persecuted religious groups defined as “heretical organizations.” Persecution of the Assembly, a Christianity cult, not familiar to most non-Christians, has escalated over the past few years, as well as persecution of Falun Gong, Eastern Lightning, and the Shouters, with authorities arbitrarily arresting and sentencing a myriad of members.

When CCP police raided the gathering of one Local Church in Beijing in 2019, they deported visitors from Taiwan and a Hongkong Local Church. When authorities released Yim, a female believer, on bail, she fled to the United States and obtained asylum.
On July 1, 2019, CCP authorities seized Chen Guanji and Lin Xianzan, leaders of South 2 campus and South 3 campus of a Beijing Local Church. On August 8, 2019, authorities arrested and detained these two leaders in Beijing, Fangshan District Detention Center. On May 22, 2020, the Beijing, Fangshan District procuratorate prosecuted Lin Xianzan and Chen Guanji on a charge of “sabotaging law enforcement by organizing and using cult organizations.”

The verdict discloses that Lin Xianzan and Chen Guanji organized more than 40 believers of the Local Church to study the Recovery Version of the Bible at Jiazhou Shuijun Plaza Rooms 301 & 302, Changyang Town, Fangshan District, Beijing from June 28–July 1, 2020. On July 1 that year, Beijing, Fangshan District police broke into the rooms, and seized Lin Xianzan, Chen Guanji and others. CCP authorities also confiscated 53 kinds of books, including the Recovery Version of the Bible, Life New Testament, Life Old Testament—603 books, and four other items— in total 1350 pieces of church property.

When Lin Xianzan and Chen Guanji defended themselves, they stated:

Beijing Local Church is not a heretical organization, so we did not commit a crime.

Nevertheless, Beijing, Fangshan District Court officials did not accept Lin Xianzan and Chen Guanji’s self-defense nor the thoughts of their defense attorneys.

Chinese Local Church, a significant branch of house churches in mainland China, distinguished from traditional house churches, however, also differs from “three-self” churches. Similar to house Churches, they remain hidden due to the CCP authorities’ long-term intense oppression, and unique historic reasons. Even though, the CCP’s crackdown on the Local Church has escalated and spread nationwide over the past few years, few people know about their persecution.

In May, ChinaAid learned that CCP authorities had arrested and sentenced Christians of the Local Church in Wuxi, Jiangsu and Nanning, Guangxi.

Some call the Local Church, a Christianity denomination which Watchman Nee and Witness Lee, renown Chinese Christian leaders, founded in 1921, “Lord’s Recovery” and “Little Flock.” Its origin, as well as some unique parts of the denomination, relate to Plymouth Brethren.

Meanwhile, in the United States, and other countries, mainstream Christianity accepts the Local Church, a branch of “evangelical” Christians.

In 1983, CCP officials defined the Shouters and others as “heretical organizations” and cracked down on them. In 1995, CCP authorities categorized the Local Church—an independent denomination of Protestants which Witness Lee founded, under the Shouters. CCP officials also regard the Recovery Version of the Bible, Morning Revival, and other books and magazines the Local Church uses as publications of “heretical organizations.” 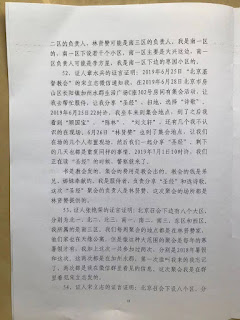 ###
Vindicate me, O God,
And plead my cause against an ungodly nation;
Oh, deliver me from the deceitful and unjust man!
For You are the God of my strength;
~ Psalm 43:1–2a (NKJV)
China Aid exposes abuses in order to stand in solidarity with the persecuted and promote religious freedom, human rights, and rule of law. If you wish to partner with us in helping those persecuted by the Chinese government, please click the button below to make a charitable donation.